Oahu was our final destination during our 26 day Epic Adventure. One final burst of warmth before heading home to the cold midwestern winter. It was a short 3 day stopover, but we made the most of it. We visited Pearl Harbor, saw rainbow eucalyptus trees, went to the north shore to see turtles and enjoy the huge waves, ate delicious food at farmers’ markets (and beyond), hiked up the Koko Crater Trail, and visited to Byodo-In Temple.

Standing on the monument above the USS Arizona will always be one of the most sobering experiences I have ever had. Taking pause to think about what happened at Pearl Harbor and consider the people who were still on the ship below brought tears to my eyes. While visiting the monument we learned that many of the crew who survived the attack choose to be returned to the ship when they die – and that the ship readily accepts them. That thought sends chills down my spine. 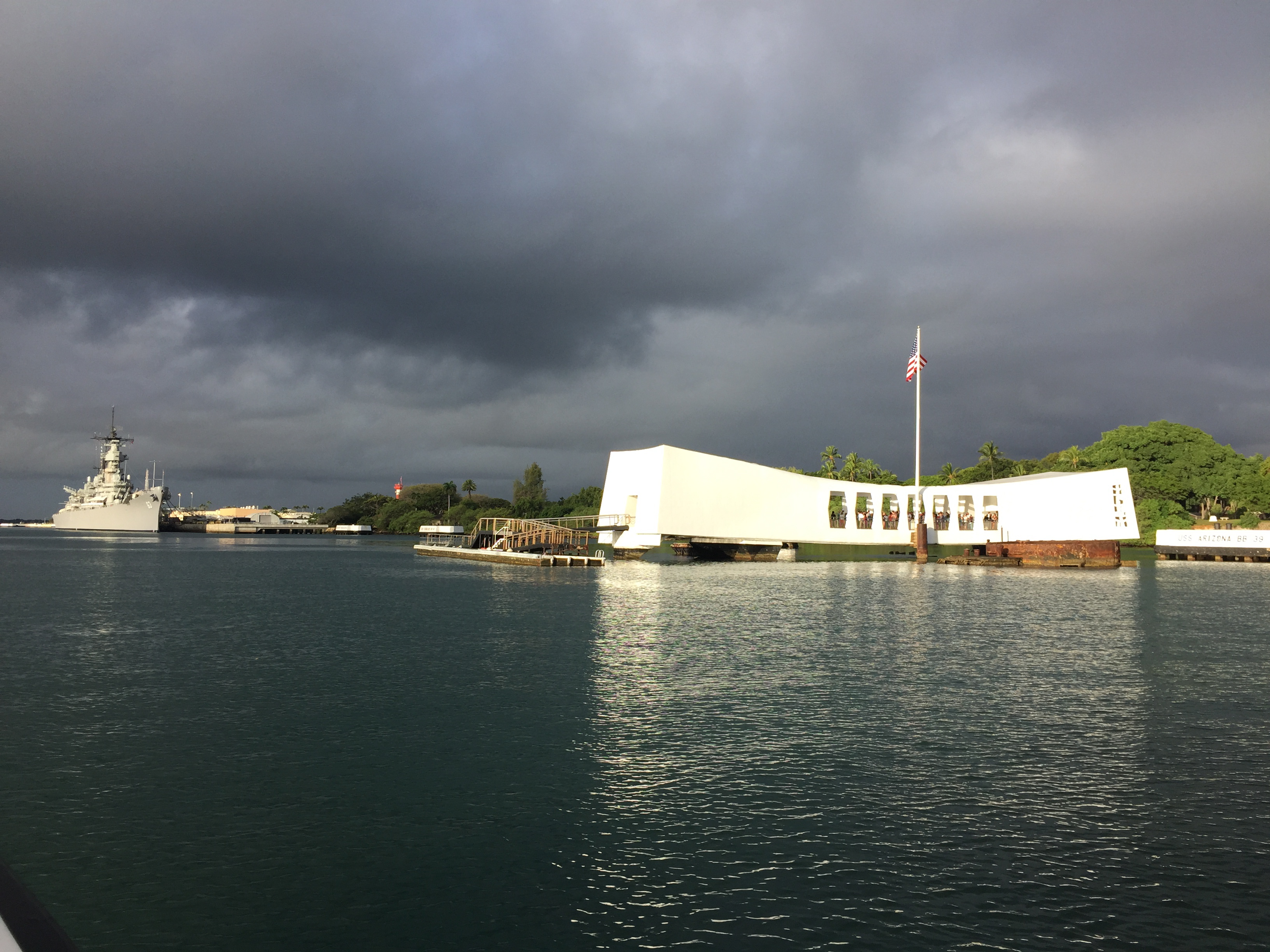 After our time on the monument we explored the museum and learned more about the happenings of those days. So fascinating and saddening to stop and take in the details at the location where everything took place.

We first learned of the rainbow eucalyptus from Bill’s aunt. She had visited Hawaii and was showing us photos from her trip when she came upon photos of the rainbow eucalyptus at the Dole Plantation – I was instantly in love! I did not have much interest in visiting the plantation, but did a quick search and found the Wahiawa Botanical Garden had them as well. I immediately added it to our itinerary. 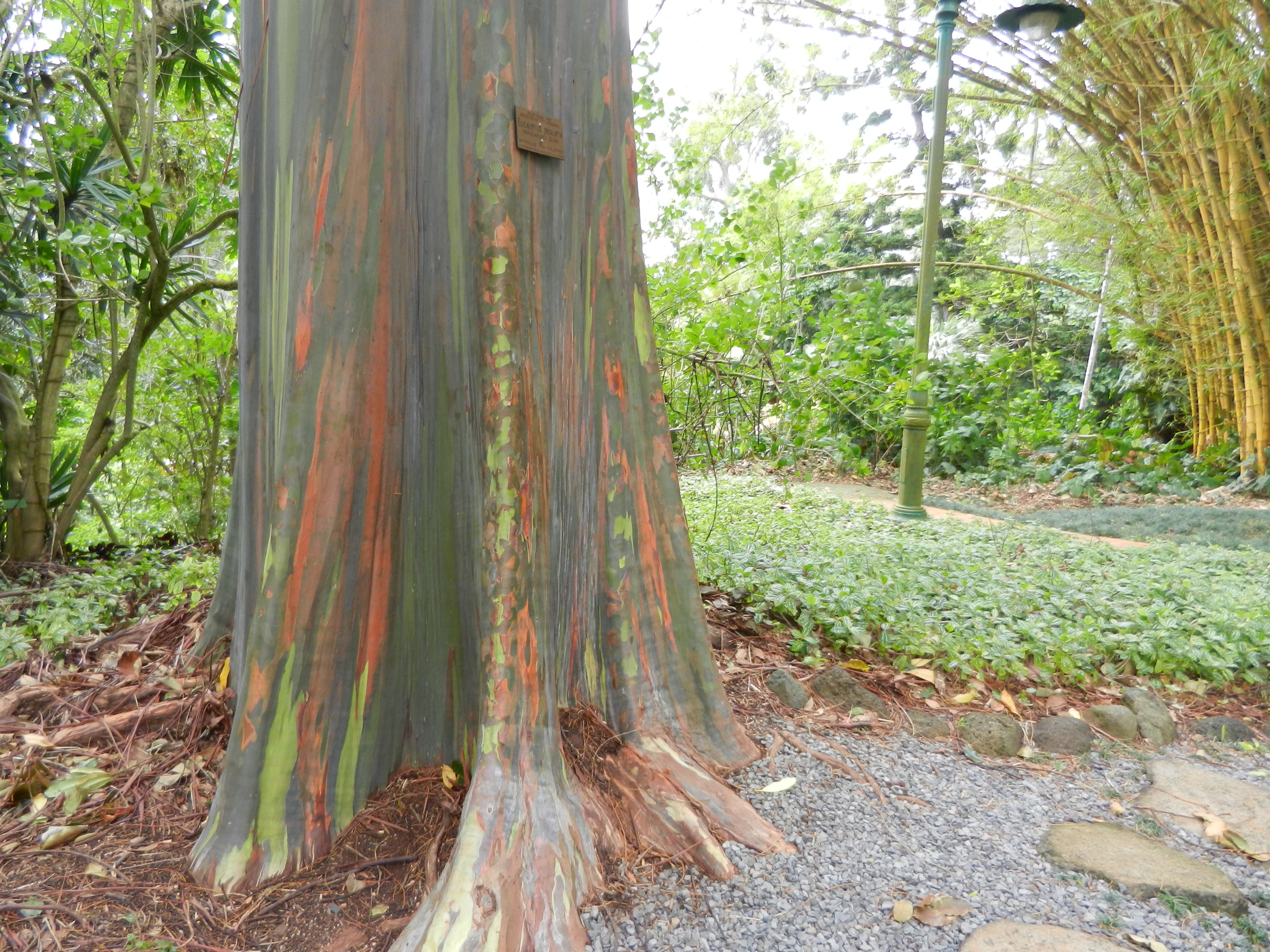 While planning this trip, I was fortunate enough to have a student worker who lived on Oahu. I asked her which were the best places to go and she highly recommended the north shore. Specifically Laniakea Beach (aka Turtle Beach)  to see turtles and Waimea Bay Beach Park for big waves. We were not disappointed on either front. 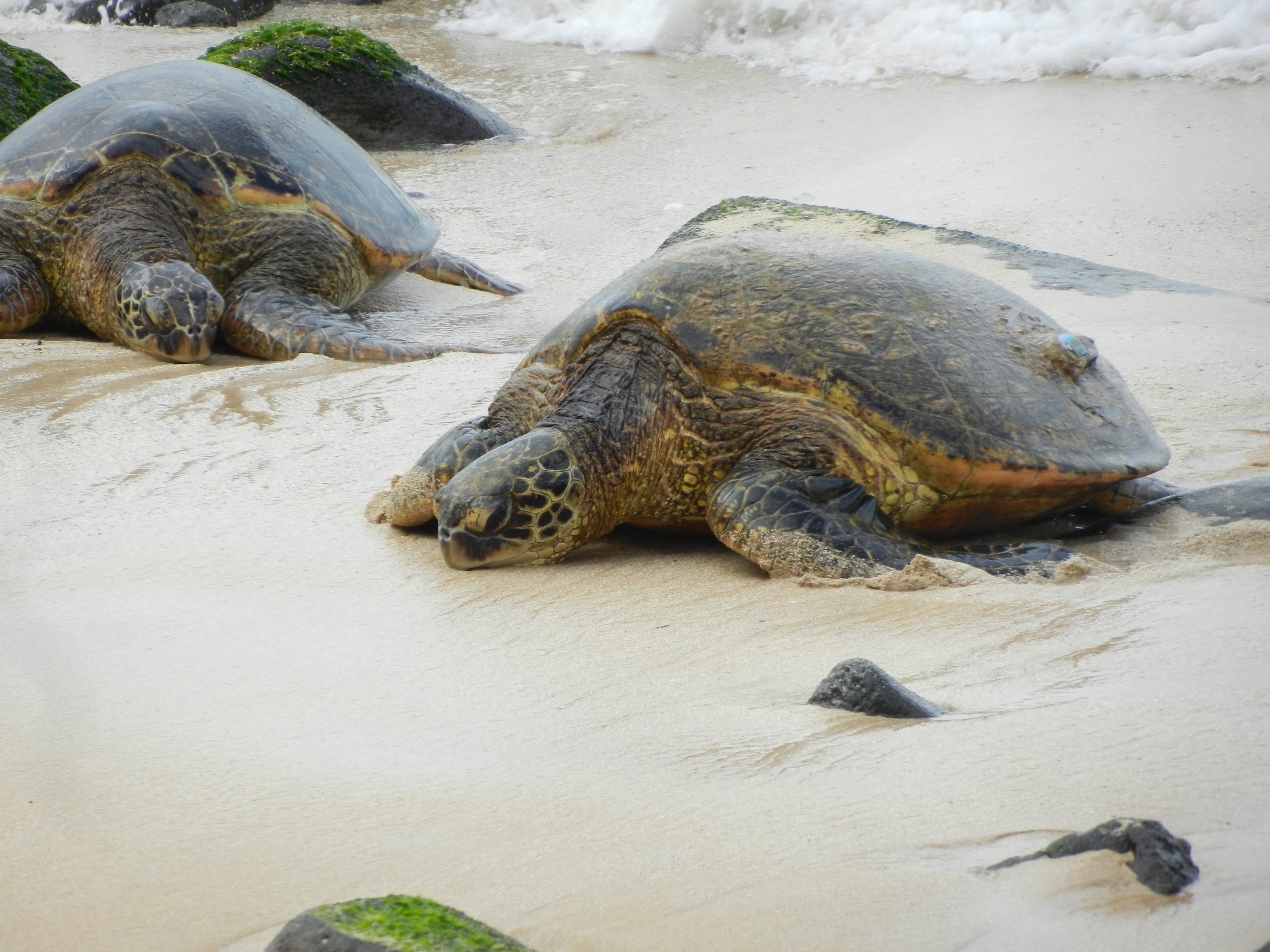 There were two turtles laying on the beach when we arrived at Laniakea and the waves were gigantic at Waimea Bay. Despite the continuous warnings from the lifeguard, we saw several people body boarding – talk about fearless! 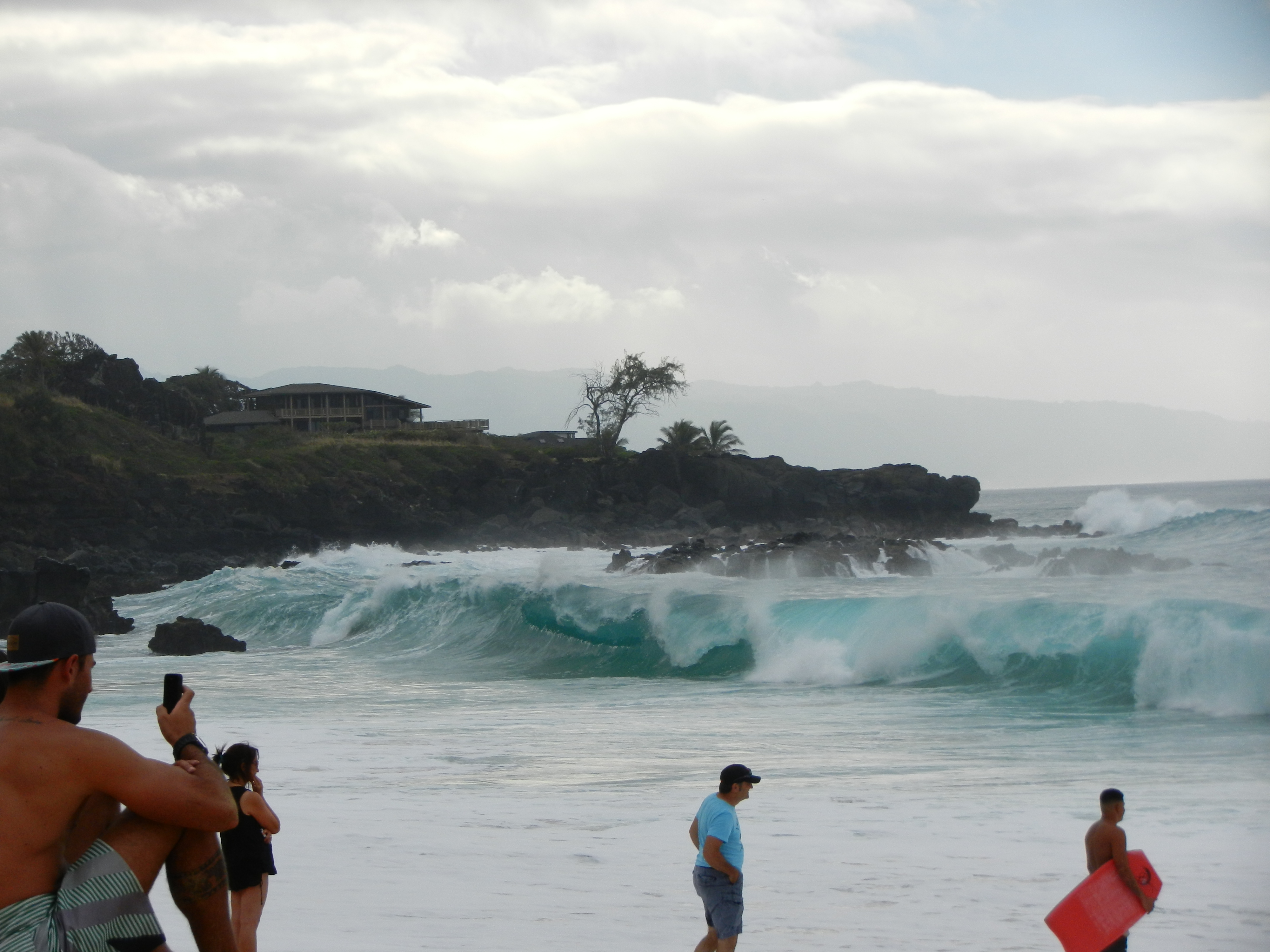 After visiting the beaches we had planned to do a short hike to Waimea Falls. When we arrived, however, we were greeted with the entrance fee sign and decided we did not wish to pay to get in. We decided, instead, to explore the farmers’ market that was set up just outside the entrance gate – and were glad we did! After walking around and taking in all of the options, we opted to share bao buns, a crepe, and two ice cream sandwiches for dinner and dessert. Absolutely delicious!

Through my research, I had also found reviews for a booth at another farmers’ market that served french toast on Saturday Mornings. We decided to check it out and were pleased with our meals. Bill still talks about that french toast. 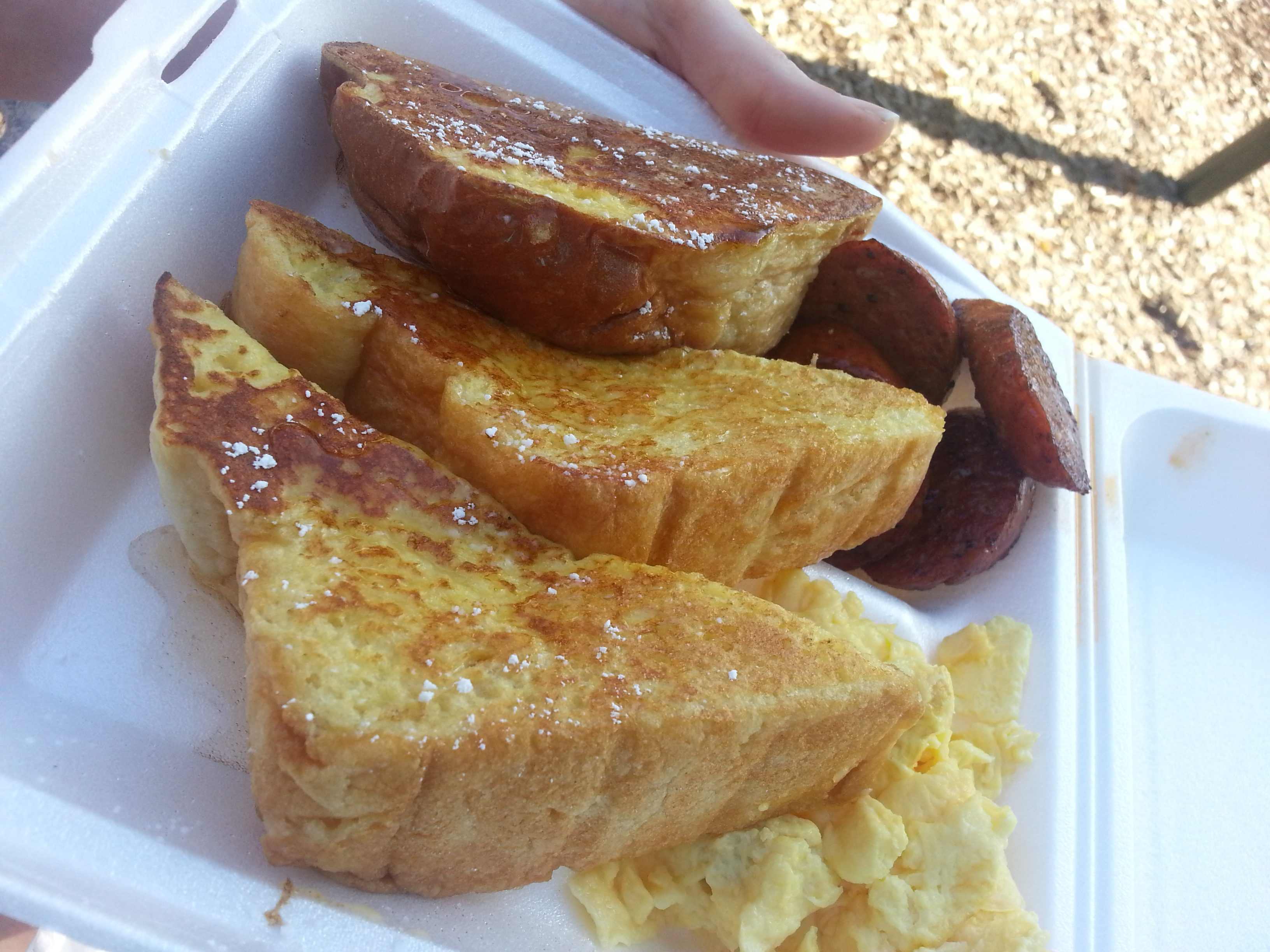 Enjoying the idea of doing something less popular than Diamond Head, and getting the chance to see Diamond Head instead of being on it, we took the recommendation from our friend to hike up Koko Head. When we arrived, however, we were shocked to see that the hike entailed 1,048 stairs up the side of a volcanic crater. We were not exactly dressed for that (we were expecting a more leisurely hike), but we persevered nonetheless. 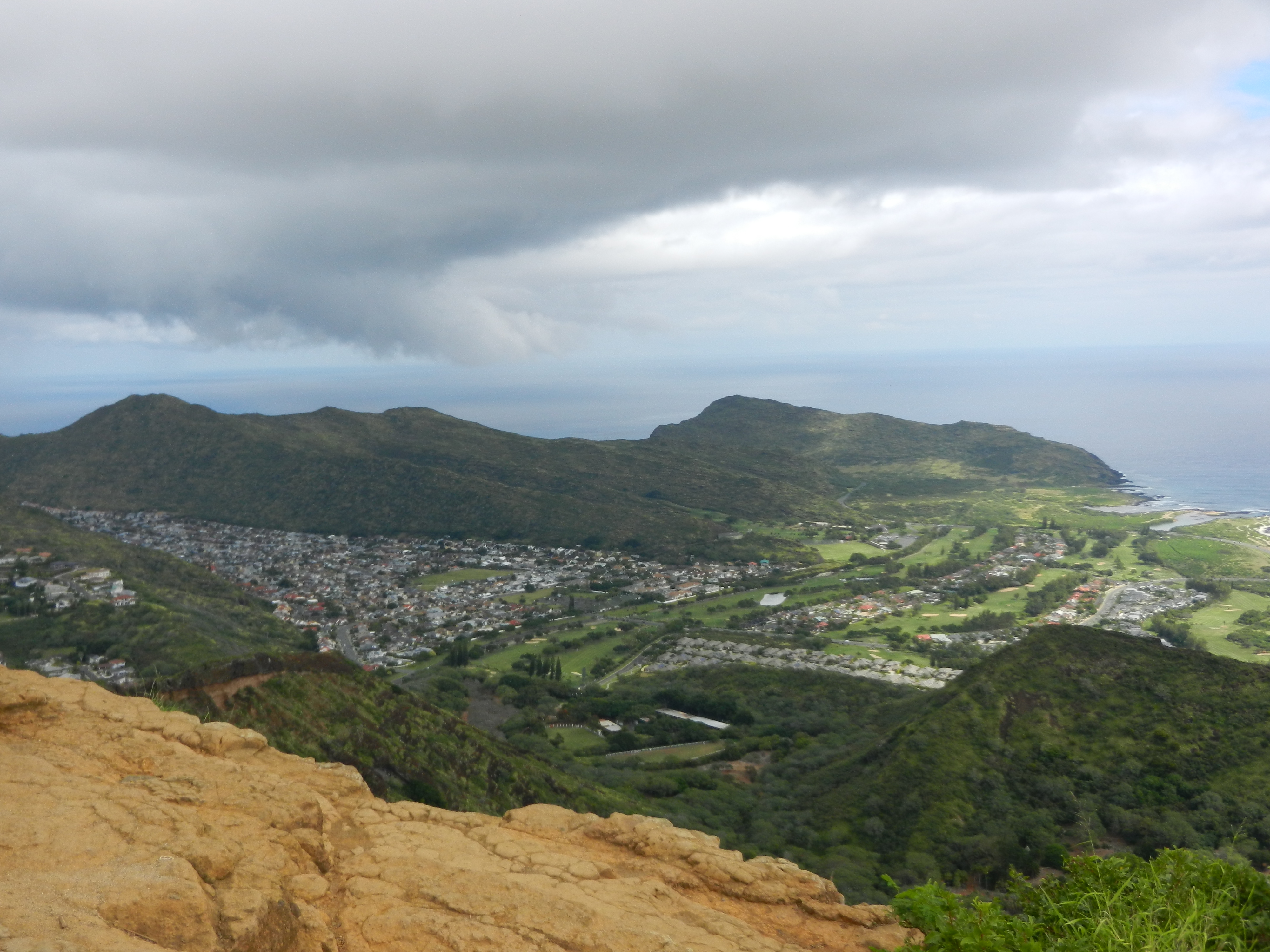 It was hard work to get to the top, but when we arrived we were greeted by stunning views of the island and the noise of two whales slapping their tails off in the distance – our first ever whale sighting!

Having heard so much about the Byodo-In from others who had visited Oahu, we decided to visit and see it for ourselves. As is typical for the sights we visit, the temple was in the process of being painted while we were there. It was a beautiful, peaceful place, and Bill enjoyed hitting the Sacred Bell – but having already visited Wat Pho in Bangkok it was hard not to compare the two. 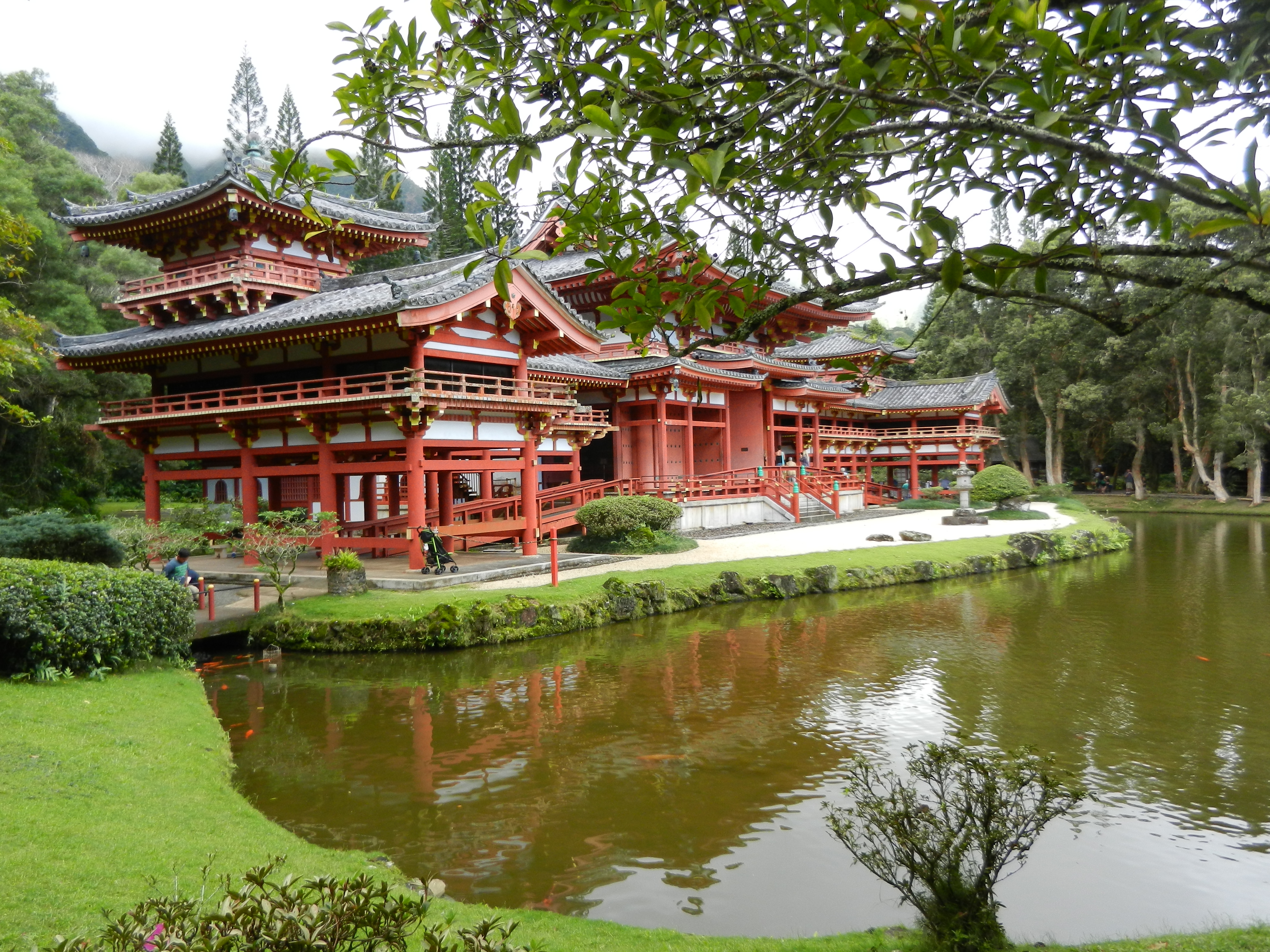 Hot dogs are not a food I typically flock to, but Hula Dogs are so much more than hot dogs! The sausage, accompanied by tropical flavored condiments, encased inside a roll that has been skewered by a special heated machine to put a hole just short of its full length – yum! Something you will find nowhere else. 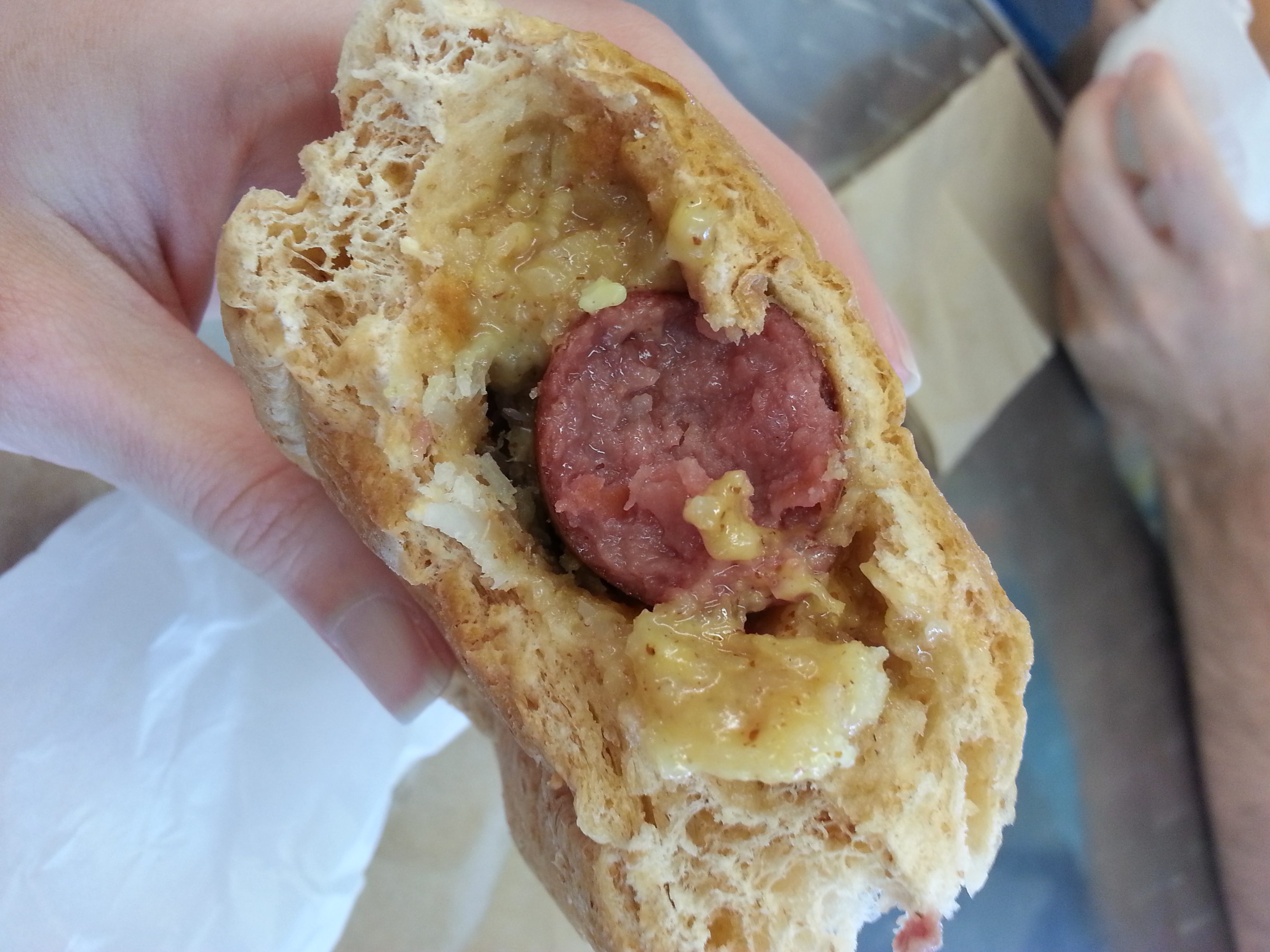 Alas, after enjoying island life for a few days, it came time to fly home. If I remember correctly, the Honolulu Airport was the first open air airport I had ever been in. We have since visited the Big Island and Maui – so it has become common place – but being in open air airports still fascinates me. 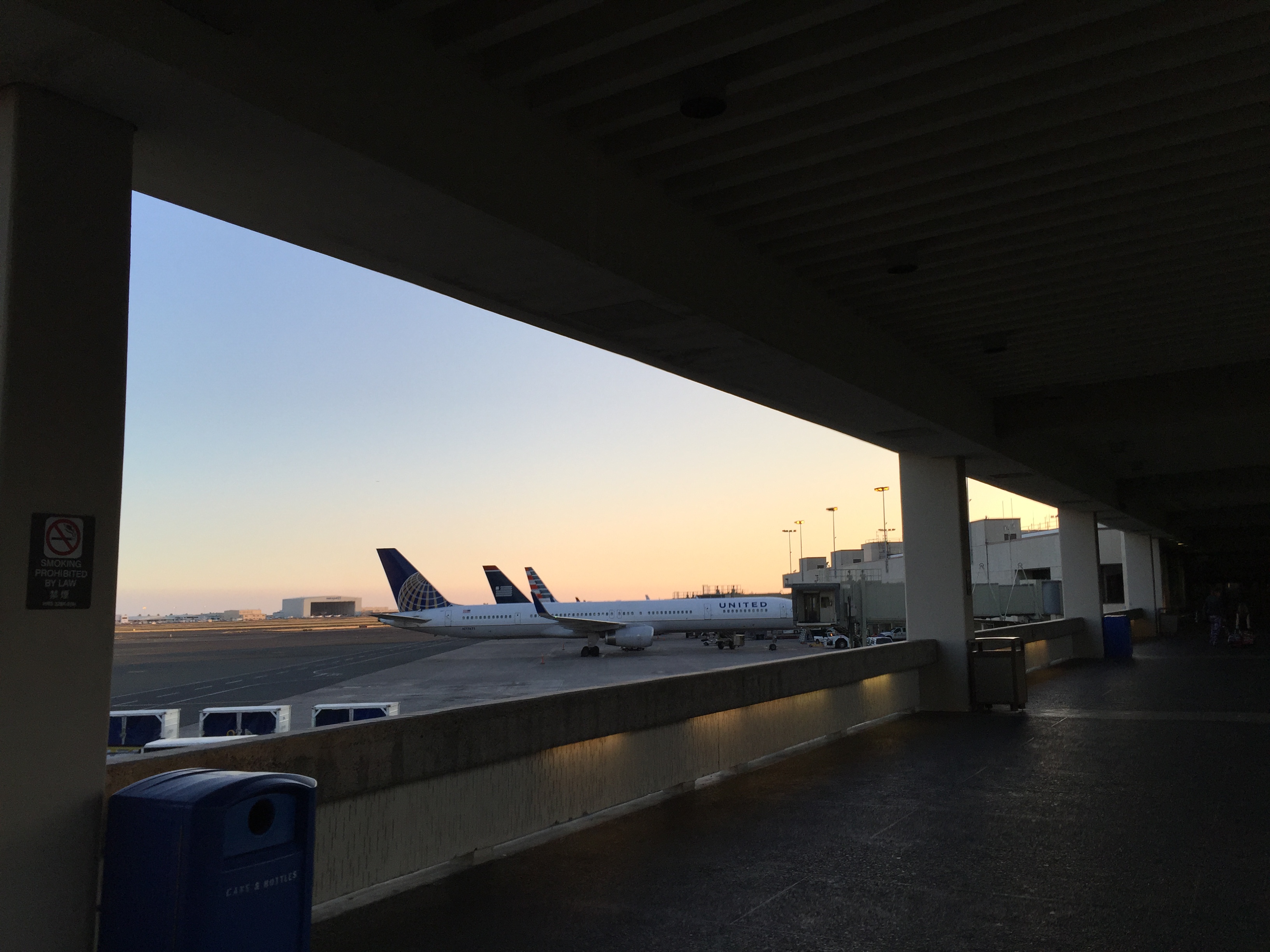 Maybe it is my affinity for the outdoors and the warmth that fills me with so much excitement when I am in them. Whatever it is, I just love that feeling! (Although I prefer arriving, not departing.)

In bed by 8pm the night before and up before 3am, Bill and I got ready, gathered our head lamps, winter head coverings, hot water for our tea and hot chocolate, and breakfast items and were on our way – driving on hour through the switchbacks of Highway 378 and ascending 7,000 feet to the 10,023 foot summit of Haleakalā.

Arriving around 4am – the fourth car in the parking lot – we unloaded the beach chairs and blankets we had packed into the Jeep the night before and headed up the stairs to stake our claim on where we would sit to watch the popular spectacle of sunrise over Haleakalā. So popular, the National Park Service implemented a required, $1.50 per vehicle, reservation process on February 1, 2017.

After reaching the top of the stairs, the stars greeted us with a warm reception. We’ve witnessed dark night skies before, but this landscape, and the fact that we were fortunate enough to be here during a New Moon, made for a sky that was reminiscent of the night skies that are depicted inside the domes of planetariums. It was remarkably awe-inspiring. To pass the time, although we were only armed with our cell phones for photography, I did my best to collect evidence of the celestial scene – the best shot including what I believe may be the Southern Cross. 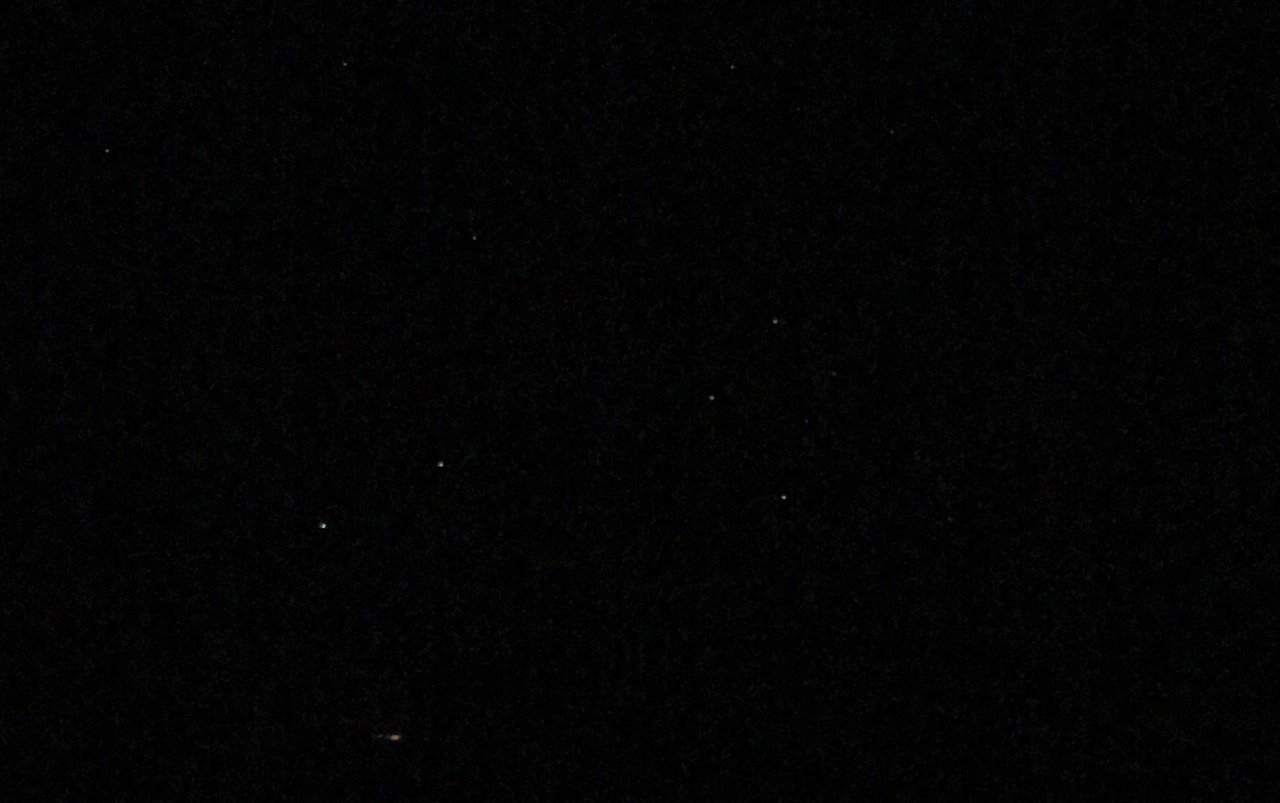 As we waited, Bill enjoyed his hot chocolate and I drank my hot tea with our pineapple macadamia nut pound cake. More and more onlookers arrived – nearly all of them having the same reaction upon setting their gaze on the star filled sky. (If only they would be better informed to aim their lights toward the ground and not out in front of them – into other people’s eyes and creating disruptive light for those trying to photograph the unbelievable scene.)

For 2.5 hours we sat and waited. Although we are from the Midwest, where temperatures of 30 degrees or below are typical during the winter months, it was definitely cold sitting there in the 40+ degree air with little movement (and no gloves) for that length of time. I did my best to bundle up with the two blankets I had, and Bill resorted to pulling his blankets up over his head to help trap all the heat he could. At one point I heard a man to my right say something about the two of us appearing to have experience with coming to watch sunrise, because we were well prepared with our chairs and blankets. Ultimately, we were so well prepared thanks to our host, Michael, at the Upcountry Bed & Breakfast.

Upon our arrival at the B & B the day before, Michael gave us the introductory tour. Starting at the front door, he showed us the basket of warm clothes and blankets, and the many beach chairs – instructing us to take a chair for each of us and “the whole basket” of warm items as we were the only guests planning to drive up for sunrise the following morning. We chuckled, but did decide to take the whole basket with us. With our philosophy of traveling as lightly as possible, we had only brought our winter head coverings – my Everest Base Camp hat (a token from our trek last fall), and Bill’s The North Face headband. The following morning, as we debriefed Michael on our trip up the day before, he made sure to let us know that he laughed when he noticed we had actually taken him literally and took the whole basket with us. We apparently were the first to have ever done so in the 17+ years he had been hosting guests.

Around 6:15am, light began to slowly permeate the sky, and the stars began to fade. Ten minutes later, the first slivers of color started to illuminate the horizon – the show was beginning! As the sun began to appear, I quickly got up and moved to the south, to capture the views I had seen in other photos – with the sun shining up over the peak that had been sitting in front of us the whole time – leaving Bill to capture the sunrise from our original post on his own. 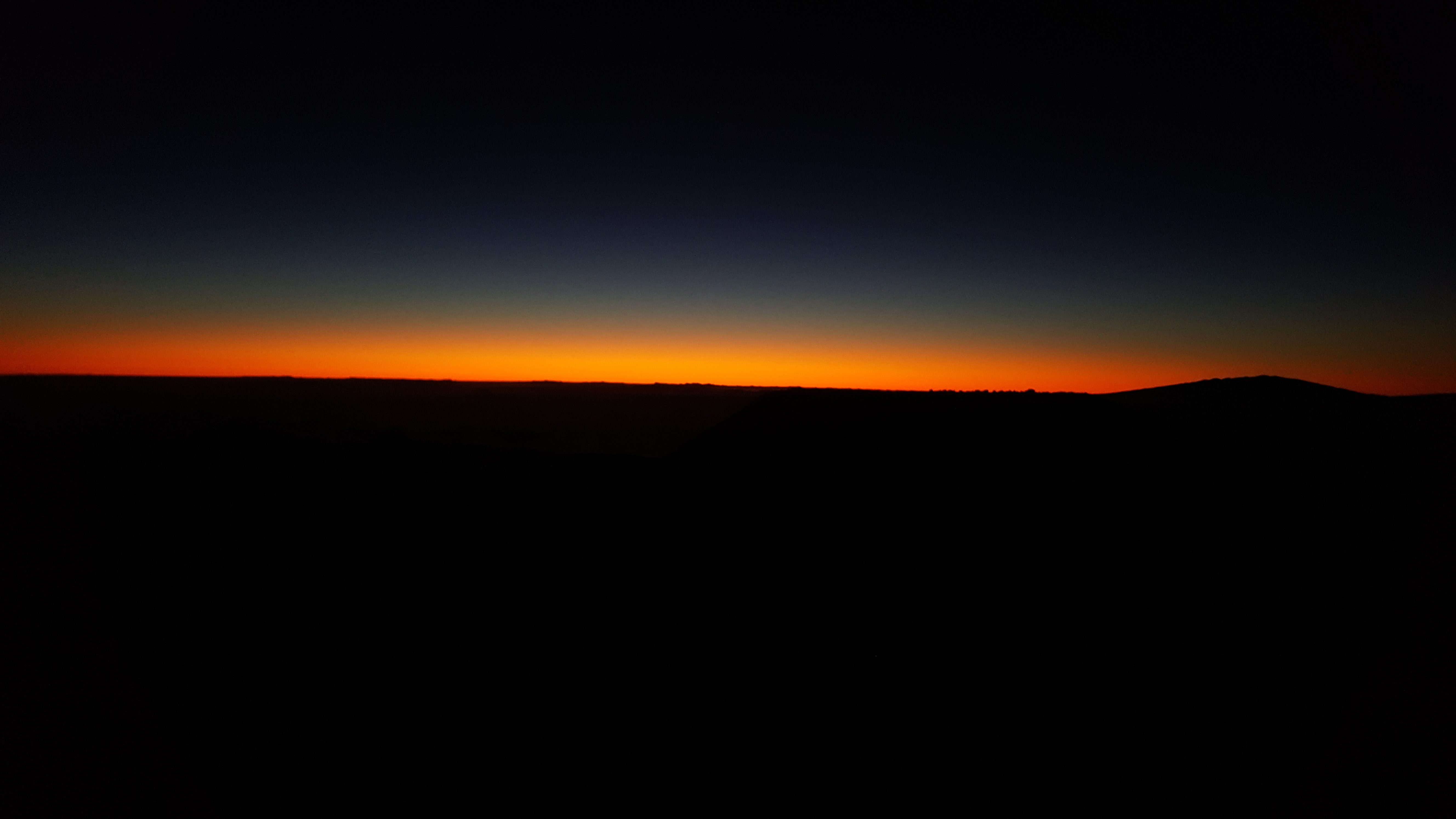 After the show was over, and the sun was high enough in the sky, I rejoined Bill and he pointed out the shadow of the mountain behind us. We took a few photos and then loaded everything into the Jeep so we could head down to the restrooms and embark on our hike for the day.

Whale of a tale

One of the fondest memories we have from Oahu is that of hiking Koko Head (of which we were totally underprepared). A friend had recommended it as an alternative to Diamond Head, saying it would give us a good hike and a view of Diamond Head at the same time – he forgot to mention it was 2200 steps from bottom to top! With that said, prepared or not, it was a wonderful experience and totally worth the hike.

While enjoying the view from the top, along with our fellow hikers who were grateful to have made it as well, we heard a noise in the water. Looking over our left shoulders, we found two whales off in the distance hitting their tails against the water. A sweet symphony of nature. Definitely worth the trip!