In 2008 Bill and I hoped to travel to London and Paris for our honeymoon, but having paid for our wedding ourselves, we realized quickly that we could not afford to go to Europe. We opted to go to the “Grand Circle” of National Parks in southern Utah instead – and I couldn’t have been happier. Of the 26+ National Parks we have visited, Zion remains my favorite. The stark contrast of the red rock formations against the beautiful blue skies remains with me to this day.

Our journey started at General Mitchell International Airport in Milwaukee, flying to Las Vegas from there. After staying one night in Vegas, and enjoying dinner at The Eiffel Tower Restaurant (next best thing to actually going to Paris), we took our rental car (a silver Chrysler Sebring convertible) and headed for Hoover Dam. From Hoover Dam, we continued on to the Grand Canyon and then beautiful Southern Utah. 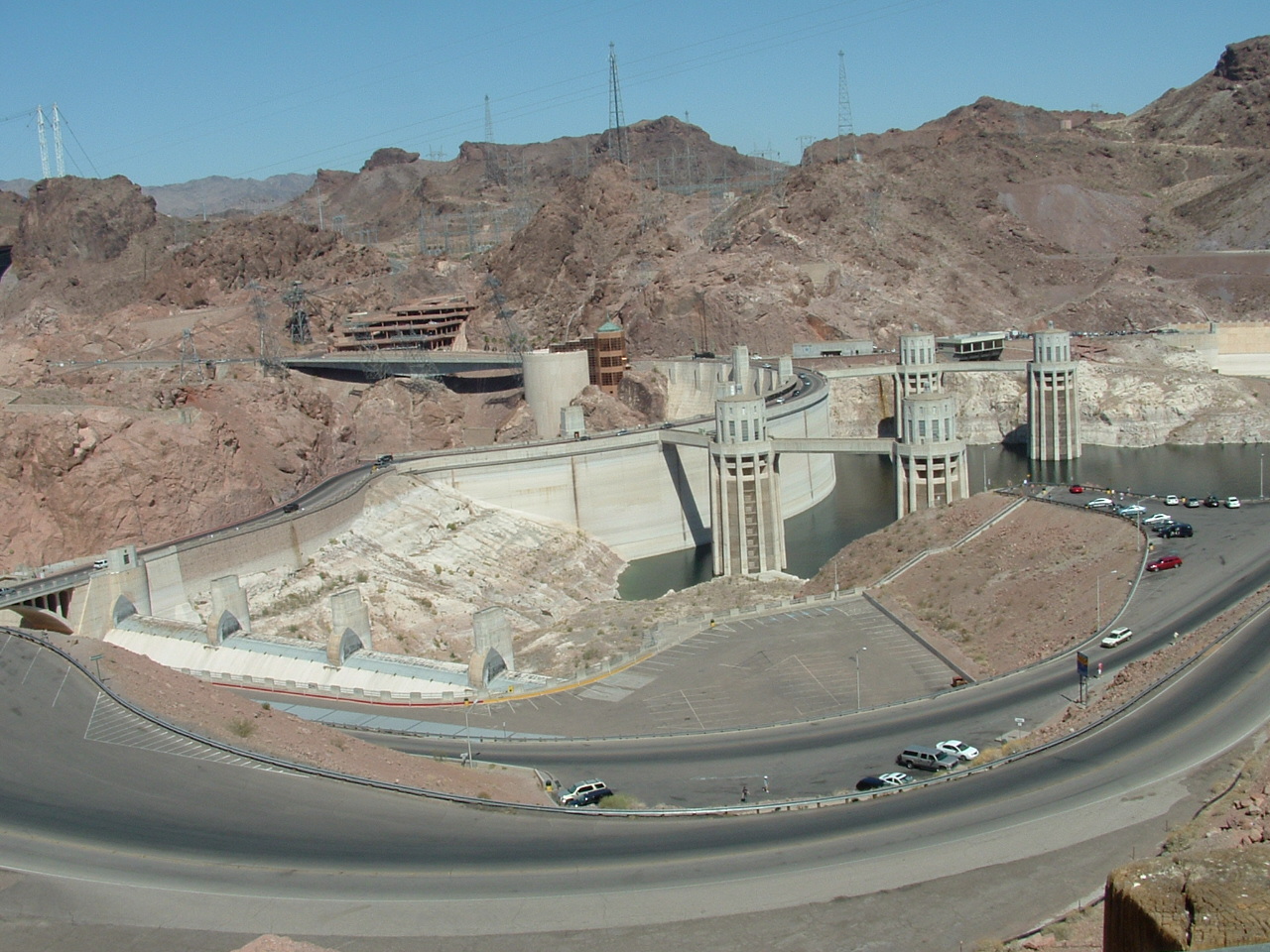 My first view of the canyon was not quite as awe-inspiring as I had imagined it would be. Sure, it was an amazing sight to see, but I wasn’t exactly overcome with any special feeling – I was actually mildly disappointed. But the photos of us looking into the canyon were certainly worth it! 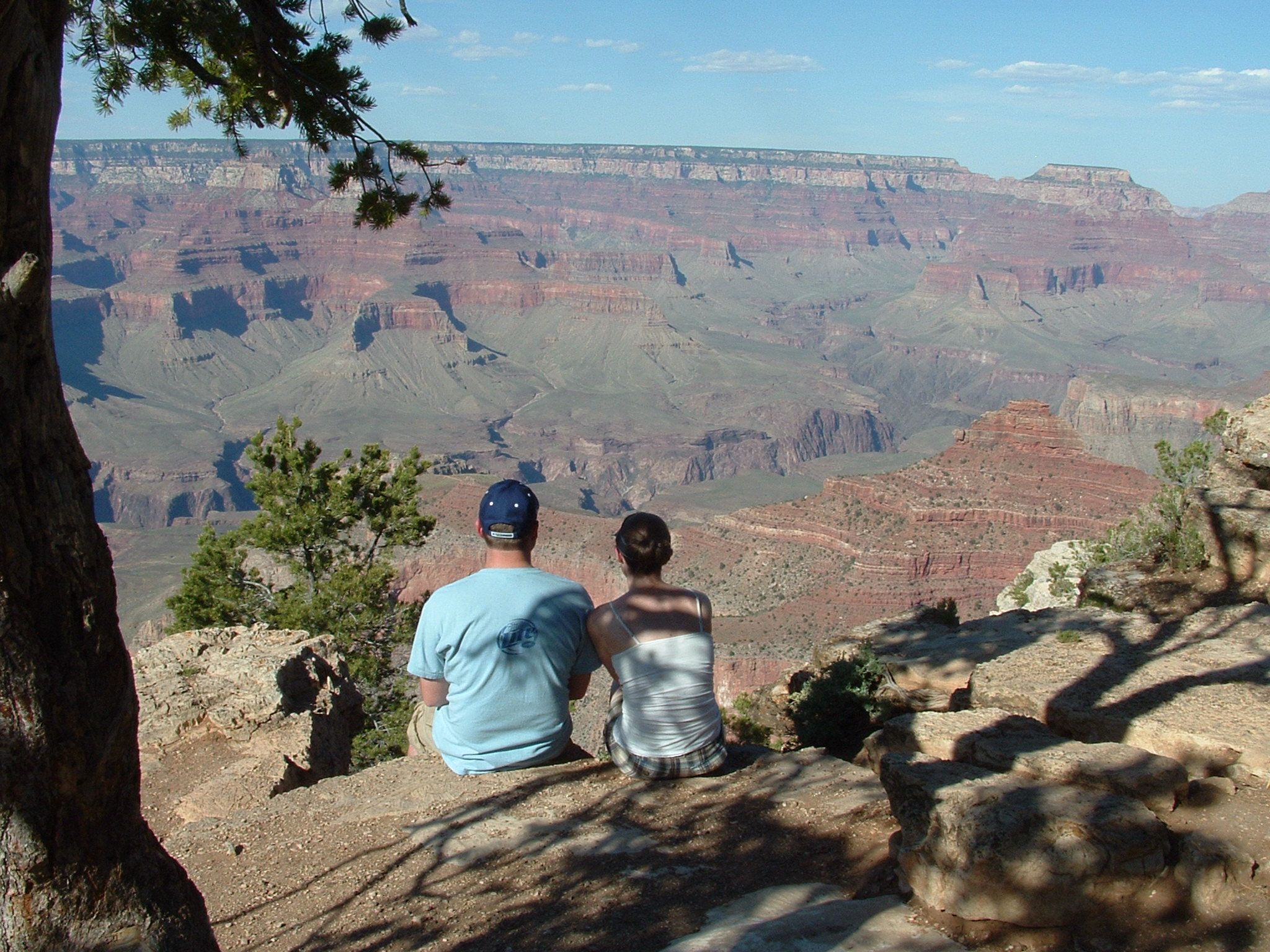 While exploring the South Rim, as we came around the corner of a trail, I was greeted by an elk standing right in front of me. Talk about being startled! Hiking along the peaceful trail and then suddenly coming face to face with an elk – that’s enough to wake you up. Luckily the elk stayed where it was and Bill and I were able to continue down a path that was a comfortable distance away from it. 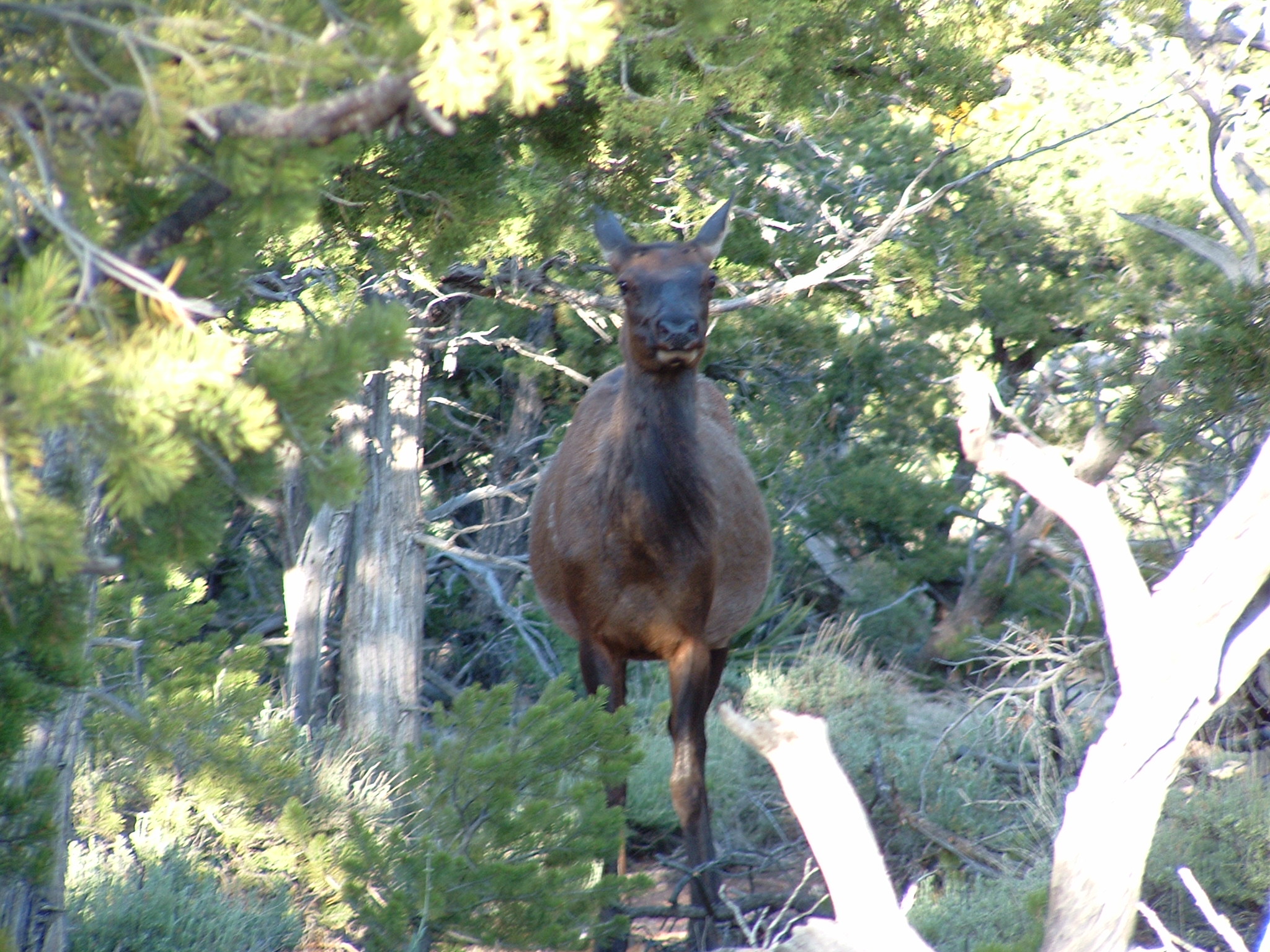 The next day – without much of a plan – we stopped at one of the gift shops, purchased a few snacks and a couple large bottles of water and started down the Bright Angel Trail. We past a few rangers, receiving the same warning each time – be sure you have enough water and sunblock with you and expect it to take twice as long to hike back out as it took to hike down. While we were not exactly experienced hikers at the time, we did know to heed those warnings. We hiked down three miles, and although we wanted to continue, we knew we needed to turn back, so we did. 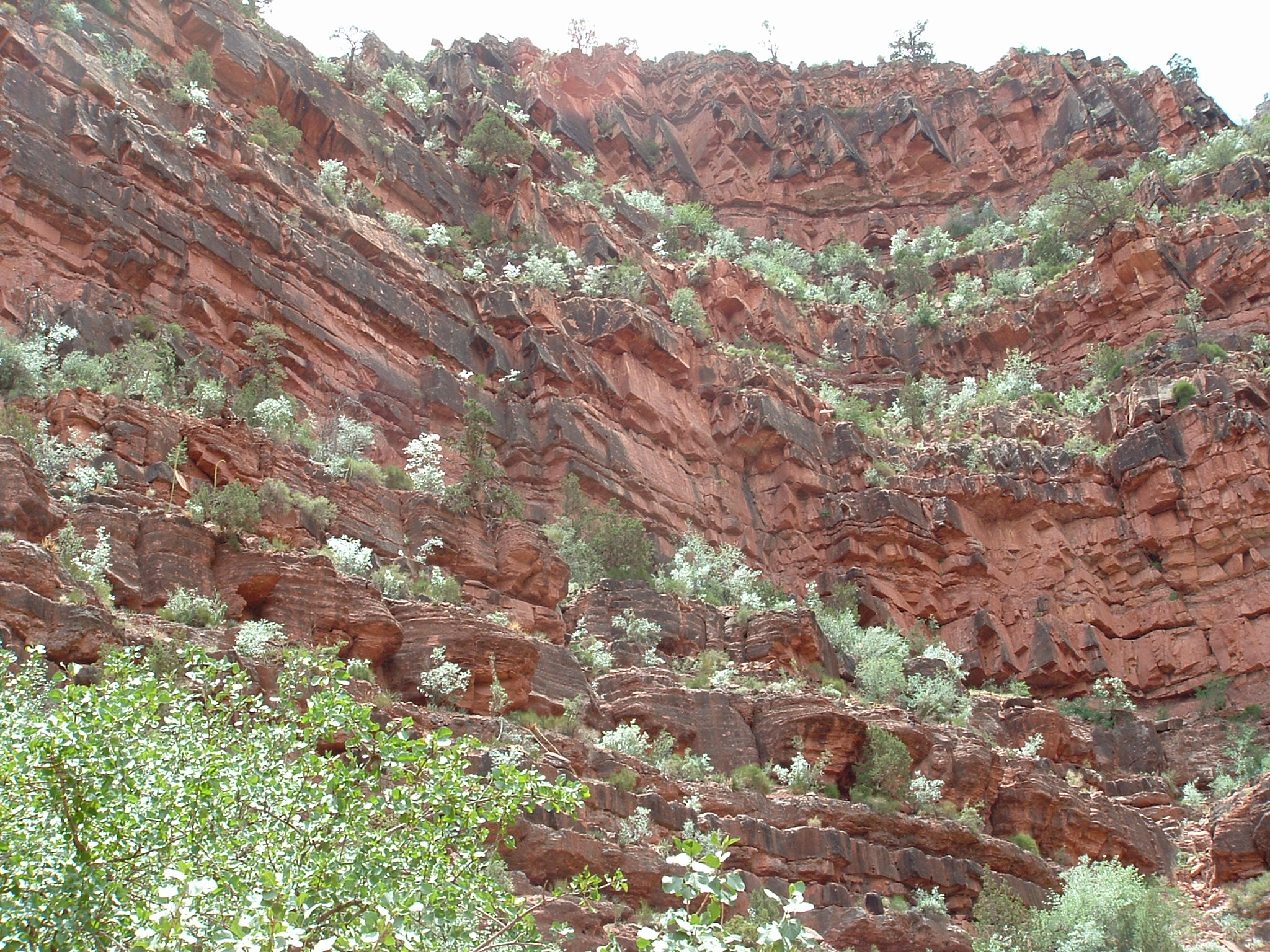 The day we left, we also visited the Desert View Watchtower. I was nice to get a different view of the canyon, but it was very windy that day so we did not stay long! 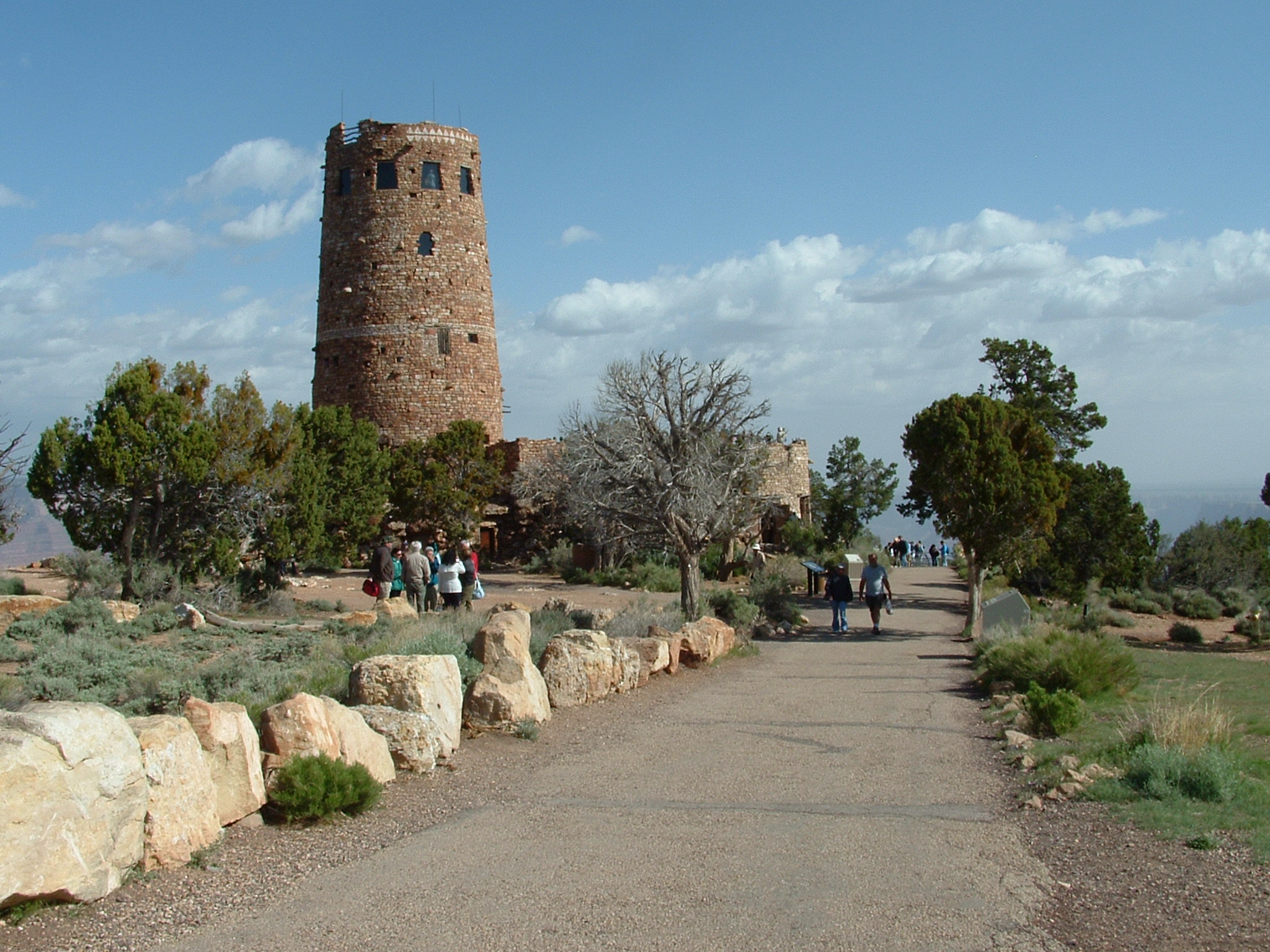 I think we will go back to the Grand Canyon someday and do more hiking and exploring. Having planned to visit all of the National Parks on the Grand Circle in a two week trip, we did not allow ourselves much time in any given place.

Having seen photos of Antelope Canyon, we decided to book a tour to check it out in person. We were not disappointed! The artistically shaped walls rising far above your head and enveloping you as you walk through. The variation of color created by the interaction with the sunlight making its way through the top. The canyon was stunningly beautiful and now we have our own photos to cherish and remember it by. 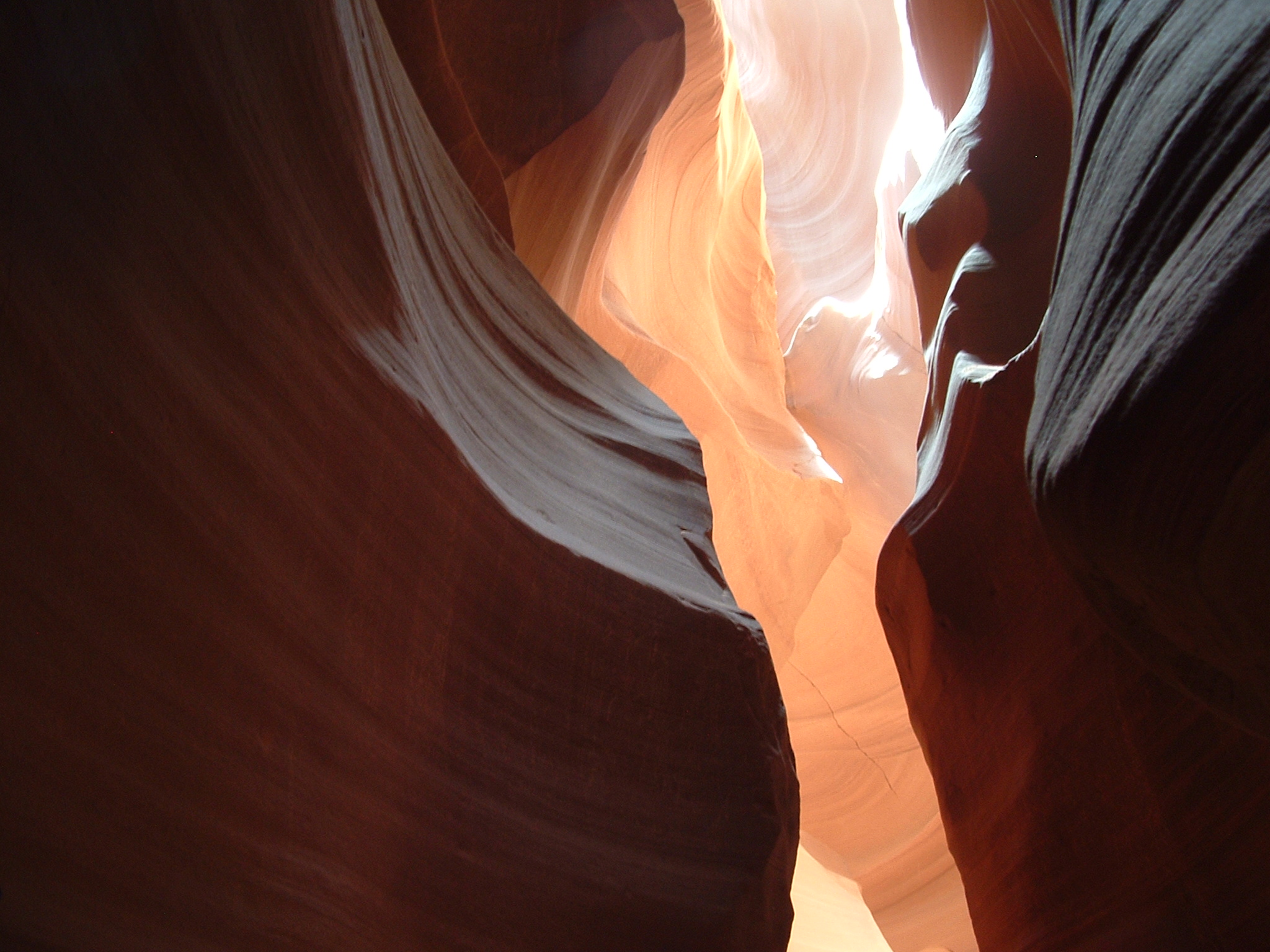 If I remember correctly, there were no gas stations within several miles of Canyonlands and as we approached we realized we needed gas. Long story short, we paid around $6 a gallon at the gas station just outside the park! Supply and demand at its finest. Canyonlands was more of a drive through visit for us. Which is unfortunate, as many years later I came to read Aaron Ralston’s “Between a Rock and a Hard Place”, and wish we had explored more of what the park has to offer. Next time for sure!

One thing we did see while we were in the Canyonlands area was Newspaper Rock State Historic Monument. This was the first petroglyph sight we had ever visited. We have since visited several others, including one in Volcanoes National Park on the Big Island of Hawaii. It’s so interesting to see the symbols that were used for communication throughout history, and to try to decipher what they mean. 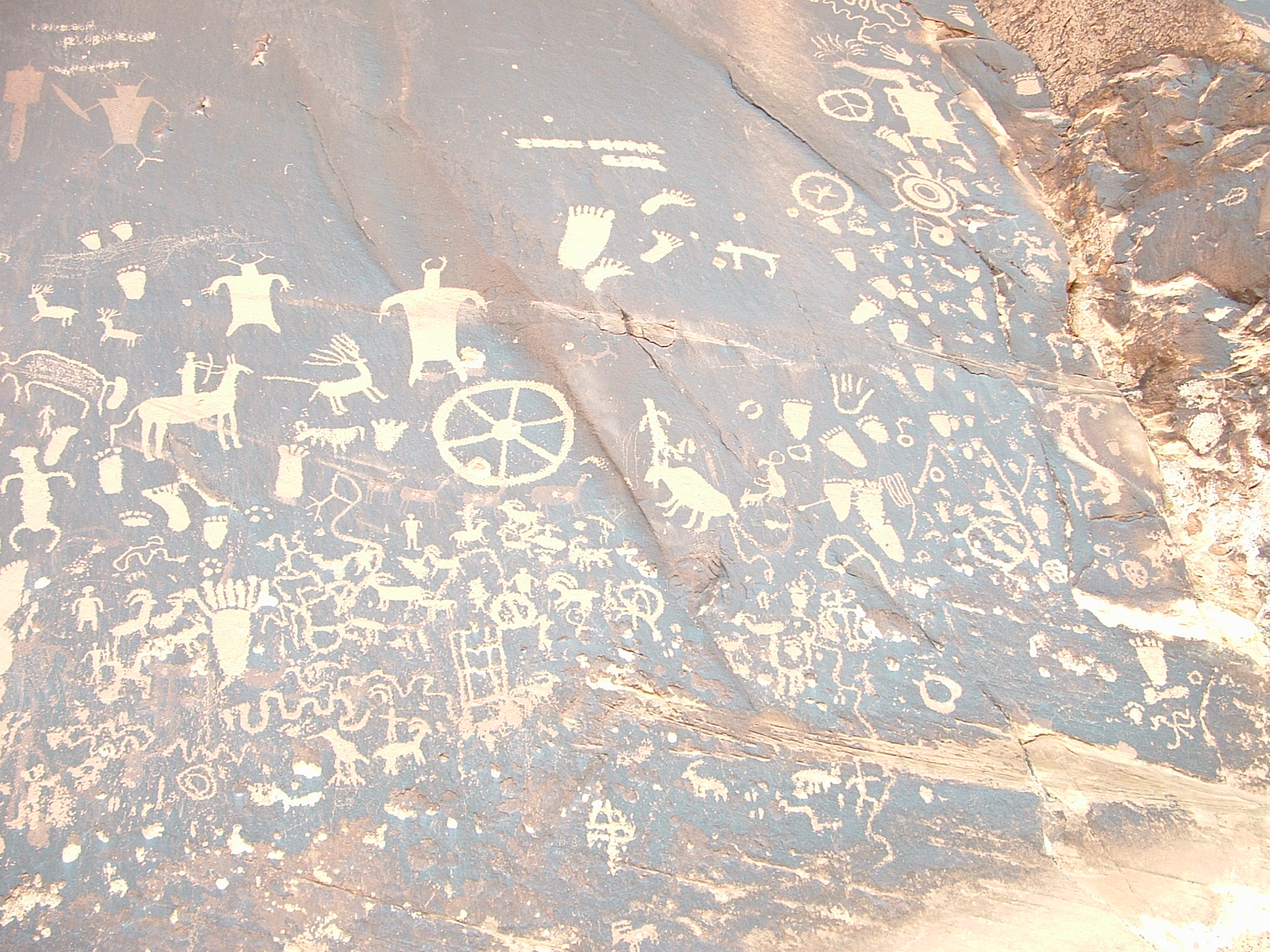 Let me start off with the restaurant Bill loved in Moab, UT – The Broken Oar. To this day he still talks about wanting to go back and have another burger. Now for the park highlights. We decided to go to the park very early in the morning, and it is a good thing we did! At one point we looked down toward the entrance and saw a line of cars that extended for miles. It would have been pretty agonizing to wait in that line to get in. 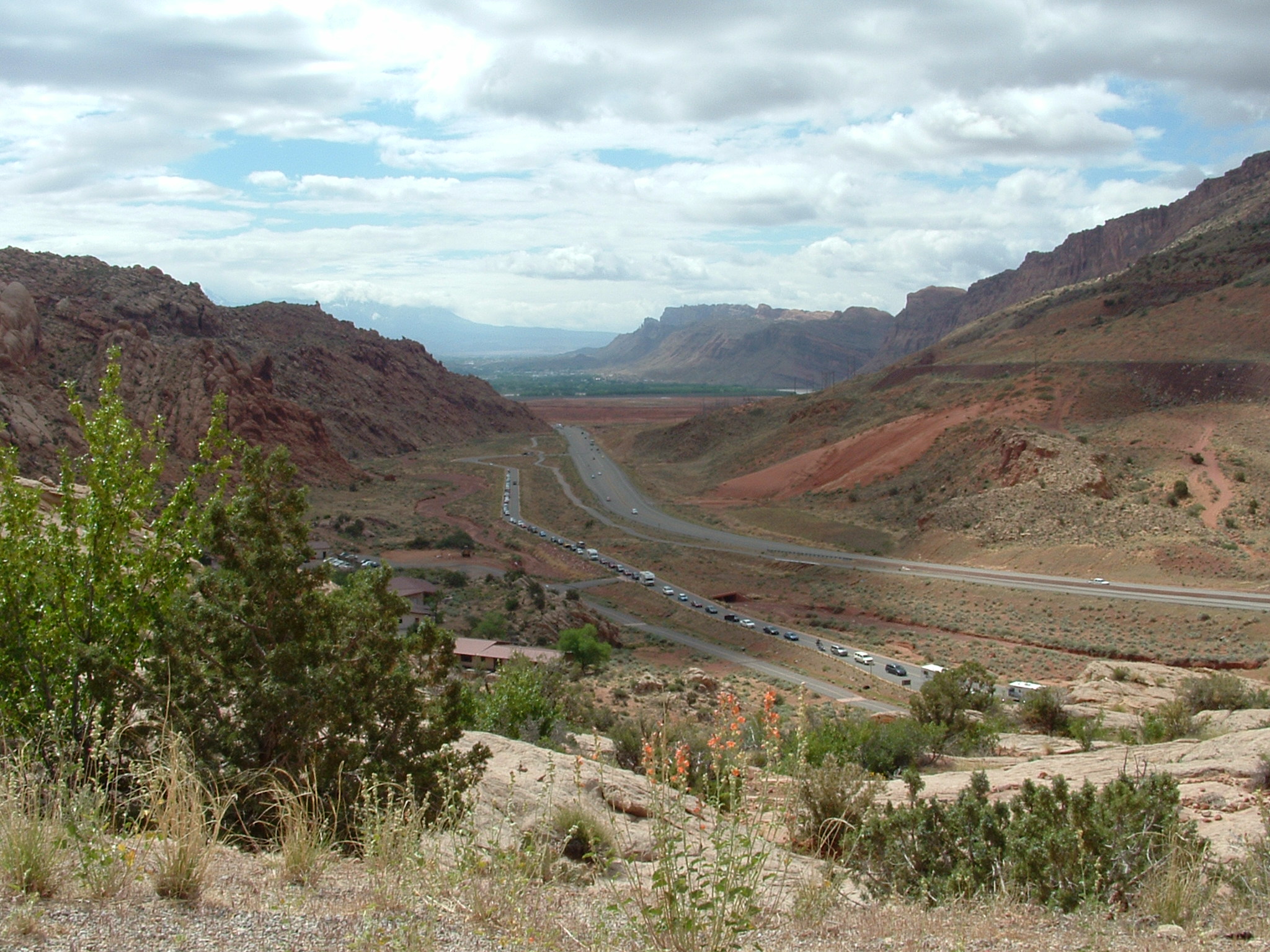 We did a bit more hiking in Arches than in the previous parks. However, when we arrived at the parking lot for Delicate Arch we chose not to walk up to get close to it. I guess that just means we will have to go back here as well. 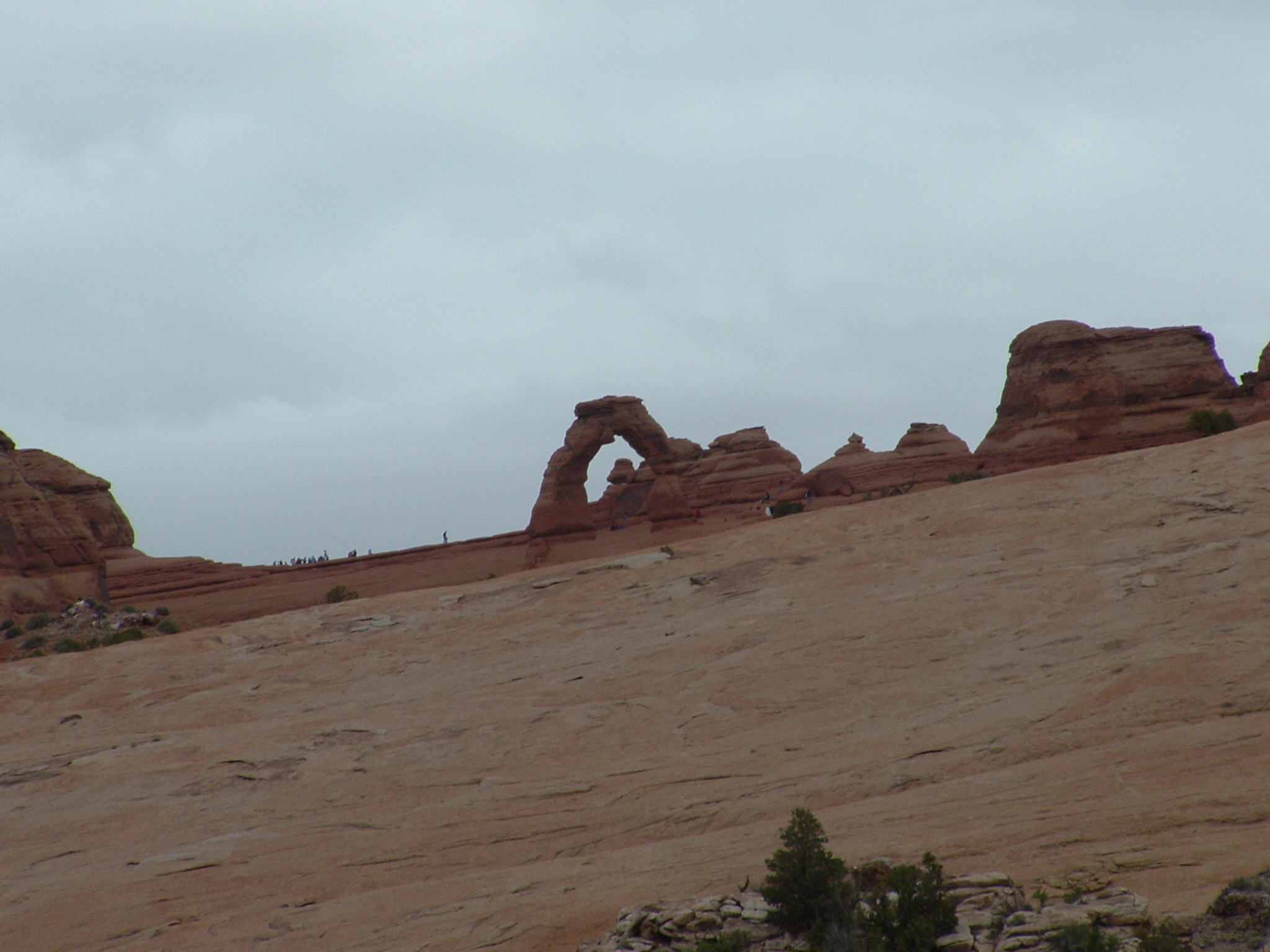 We were fortunate, however, to see Landscape Arch, and nearby Wall Arch – which collapsed less than three months after we were there! I am just glad it didn’t fall while Bill was standing beneath it for a photo. How interesting to think that we were able to see a geological formation that had (knowingly) been there for over 50 years and disappeared very shortly after we were there. Nature is a wondrous force! 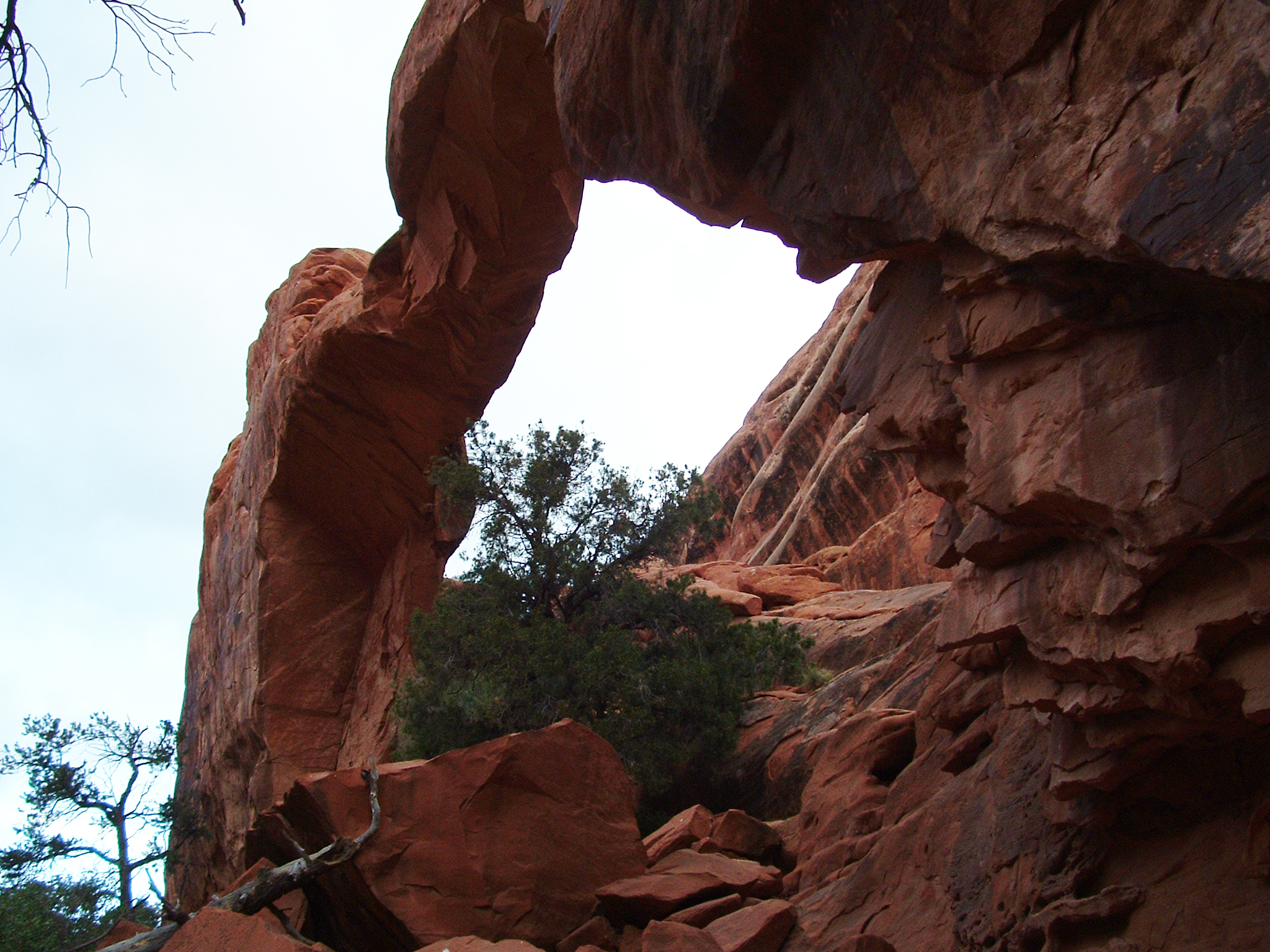 Capitol Reef was another drive through visit. While I enjoyed Arches, Capitol Reef was where I really started to fall in love with Southern Utah. The tall red rock walls against the bright blue sky were a feast for my eyes to see. I still remember sitting in front of the homestead, eating our bread and strawberry jam, and being awestruck at the natural beauty that surrounded us. The homemade bread and jam were very enjoyable as well. 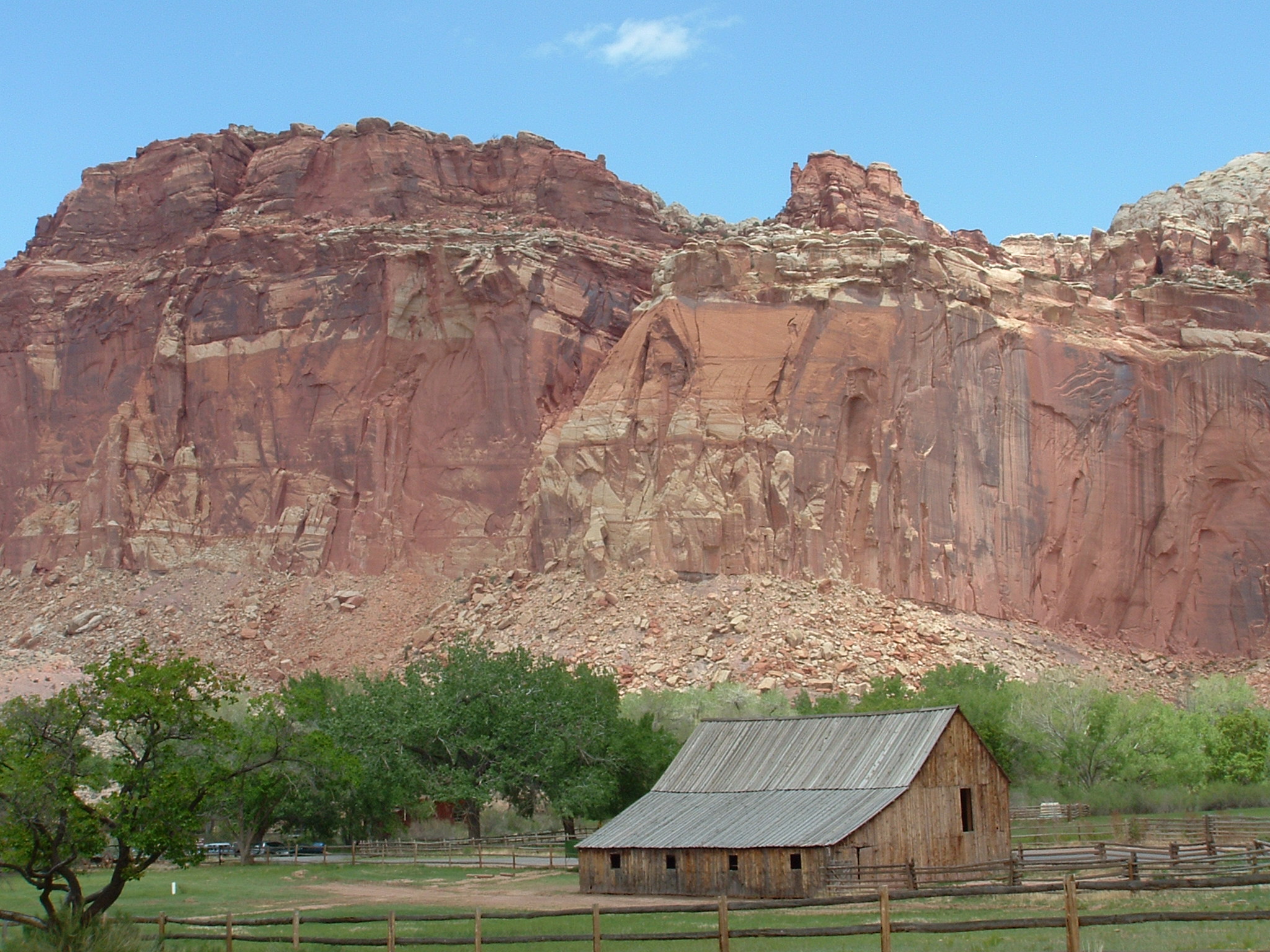 It snowed while we were in Bryce Canyon. And, unfortunately, Bill had packed only shorts for the trip. (We were a bit preoccupied trying to take care of everything for the wedding while also packing for the trip.) Try as we might to find pants, they were just far too expensive for our budget at all of the specialty outfitter stores that were available in the area. No Walmart out here! None-the-less, The hoodoos at Bryce Canyon were formations like none we had ever seen. And the vastness of the area they covered went on and on. I wish we had been able to explore more deeply into the park, but between the cold temperatures and our lack of time and energy for hiking, we decided to stick to the more easily accessible areas. Again, one we will have to go back to. 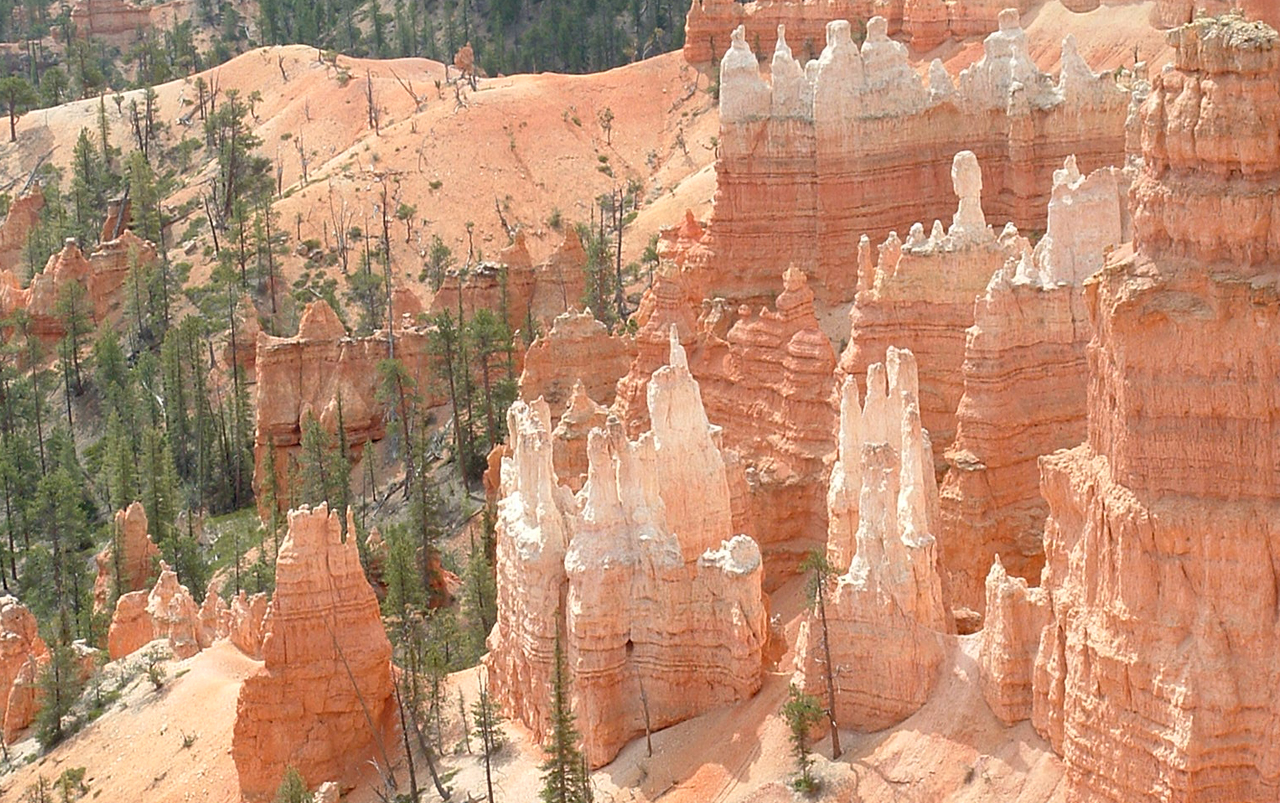 We had a couple days in the Zion area, and that likely contributed to my falling in love with it. We attempted to hike to Angel’s Landing, but I chickened out once we hit an area where the trail was very narrow and there was two way traffic. I didn’t want to be the one stuck on the outside edge of the trail with the possibility of falling off the 30+ foot high cliff! Not to mention I had grown out my fingernails for the wedding and had not yet cut them off, so gripping onto the chains against the rock wall was interesting in and of itself. Although we didn’t make it all the way out to the end of the trail, we did get great views along the way. 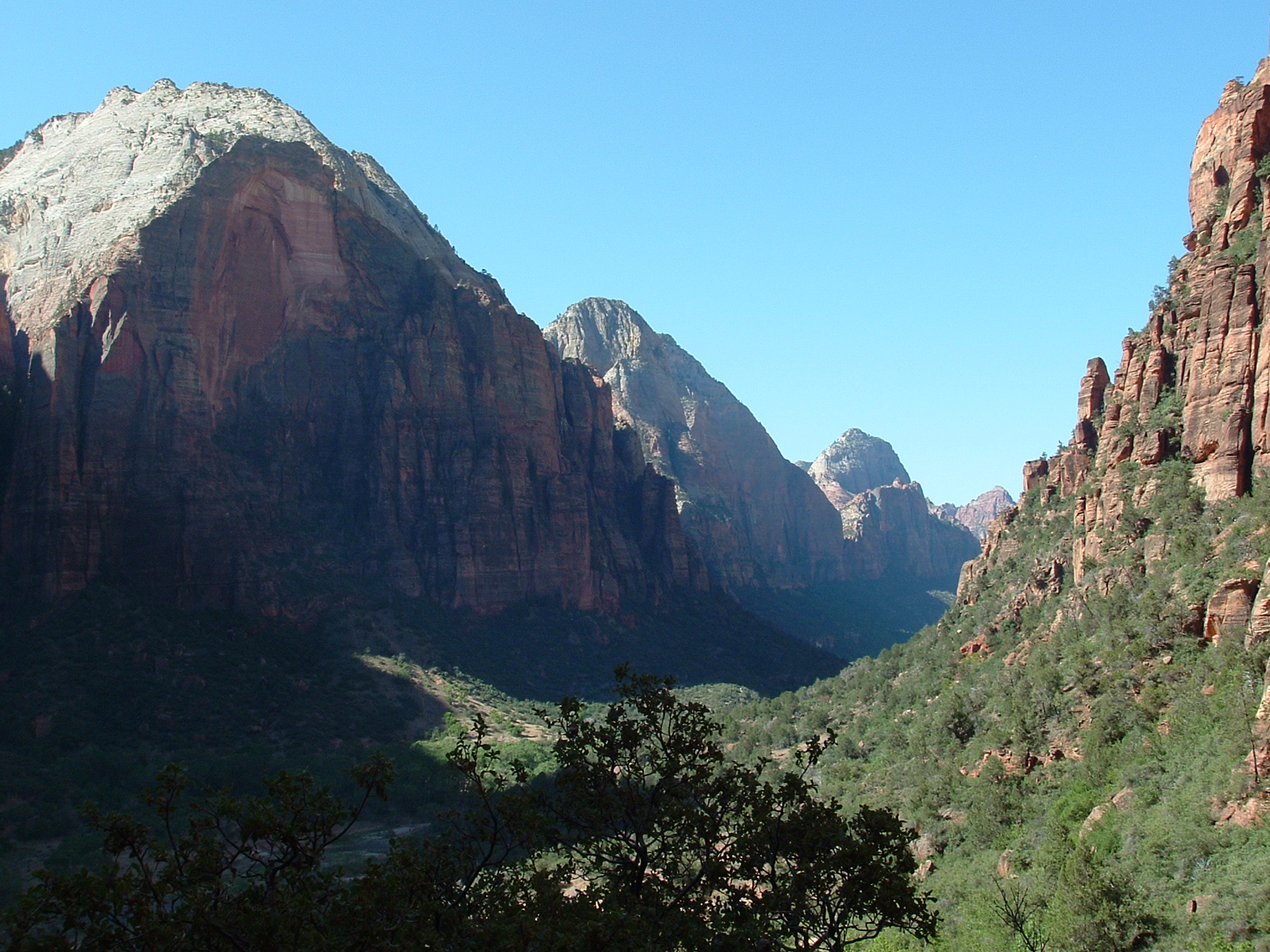 We stayed at the Best Western in Springdale while we were visiting Zion. The character of the hotel was perfect for the area.  And the views of the rock walls from the shared balconies, inclusive of rocking chairs, was something I will never forget.

The Grand Circle area in Southern Utah continues to hold a firm grip on my heart. I hope to live in Arizona someday (escaping the cold, snowy winters of the midwest) and be able to visit these parks whenever I feel the urge.

Thinking of Glacier and Waterton

It makes me so sad to know about the devastating fires that are happening all over North America right now. My heart is especially heavy for Glacier National Park and its sister park, Waterton Lakes National Park in Canada.

Having seen the terrible news of the Sperry Chalet in Glacier being reduced to rubble, and knowing the fires are threatening the Prince of Wales hotel and many other historic structures in both parks, it makes me anxious. I hope the fires smolder soon so my concern for these relics can be put to rest.

I am ever grateful that Bill and I have had a chance to visit these places and see the splendor that they are, and I hope they will stand the test of time so we may revisit them again someday!

Getting away without going (far) away

While I love to hop on a plane and take off to far away destinations, that isn’t always feasible. To help keep my stress in check in between trips, I get outdoors and take “stay-cations” as often as possible.

This past weekend Bill and I drove to Elk Grove Village in the Chicago suburbs for an overnight. It helped that we were earning extra IHG points through their Accelerate Promotion while we were at it. We had dinner at Oba Contemporary Japanese in Des Plaines. I think I can speak for both of us when I say this is somewhere we would recommend if you are ever in the area. We shared two rolls (Dragon Roll and Soft Shell Crab Roll) and each received a small salad and soup as appetizers. The char on the eel of the Dragon Roll was a flavor I had never had before with sushi – but it was a great addition. Even the dressing on the salad was memorable! After dinner we went to Dave & Busters in Addison. Not my cup of tea, but Bill enjoys it and he had a coupon to get double credits.

Sunday was a perfect day for a hike, and we took advantage of the nice weather. (I believe the temperature topped out around 76 degrees.) We went to Ned Brown Forest Preserve, hiking 7.53 miles, complete with a visit to the resident elk.

Later in the hike, we passed a group of twenty-somethings. One of which mentioned going to Vietnam. To this I responded (to Bill), “Don’t go right now!” (We came home early from a trip to Cambodia, Thailand, and Vietnam around this time last year. The first trip we have ever changed our flight plan on to come home early. More on that later, in another post.)