My solo trip to Portland

The first long distance solo trip I can recollect taking as an adult was when I traveled to Portland in 2014 to present at a conference for work. It was such an exciting time for me. My first presentation at a national conference, and my first solo trip to somewhere new that I had yet to explore.

Working for a college in their marketing department at the time, I also took on the additional task of meeting and recording video interviews with alumni of the college. This meant more things to pack (video camera, tripod, microphone, etc.), but I made it work, and still fit everything into my backpack for carrying on to the plane. My grandmother got a kick out of seeing me carry the rather large, 48 liter, backpack around through the airport. She also commented that there were some men nearby who seemed to be surprised to see a female of my stature (thin, 5’3″) carrying such a large bag on my back.

In relation to this illustration, I feel it is appropriate to share that I pride myself on:

1 – Being a “packing queen” and making things fit into bags/containers that others often doubt can be done.

2 – Being physically fit and surprising people with my strength. No, I do not weigh “90 pounds”, I weigh 120-130 pounds and that’s mostly muscle, thanks.

As I departed the security checkpoint and made my way to the gate, the excitement built. I was going to explore somewhere new and couldn’t wait to get there. Having done my Portland research, I had all intentions to visit the Alder Street Food Cart Pod at least once (I went twice), and to check out as much of the local culture as I could. Thankfully, my scheduled meet ups with the alumni, afforded me the opportunity to do some exploring and get insiders’ perspectives on things as well. 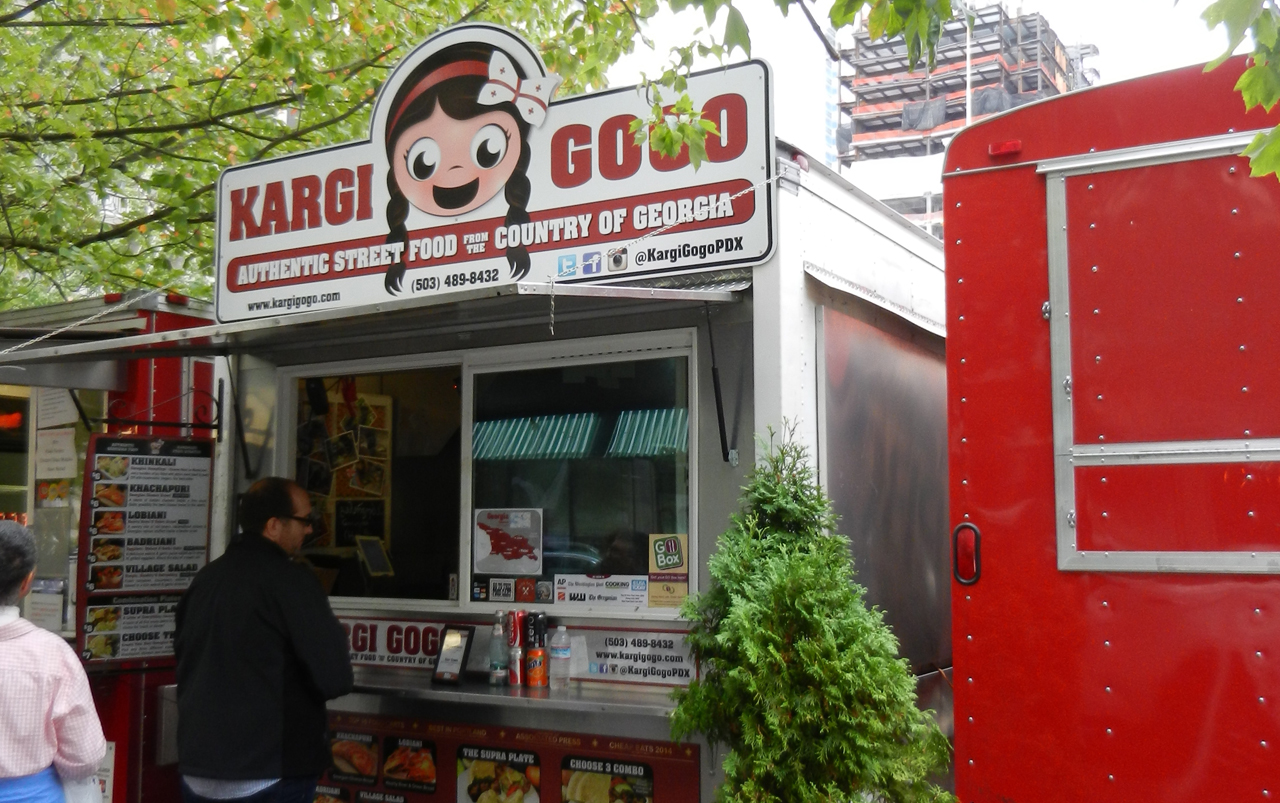 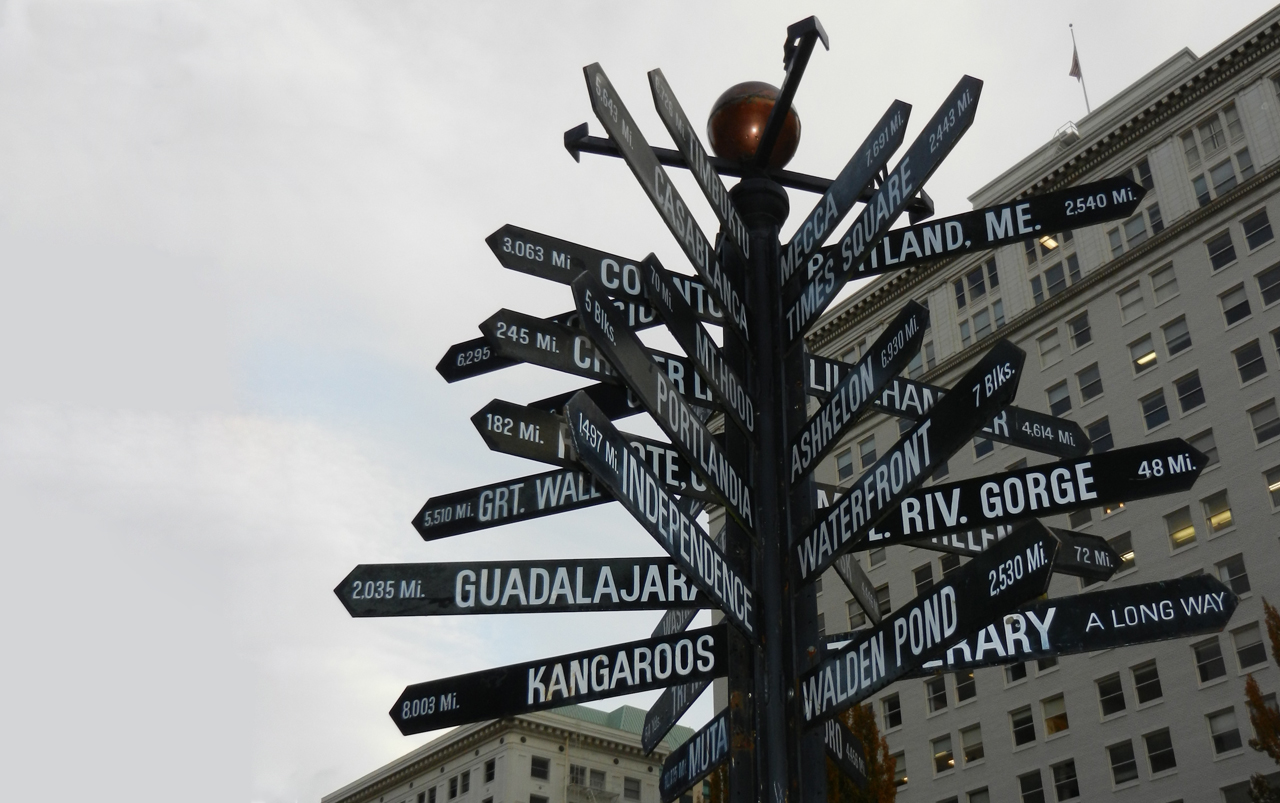 One interview took place at Nike Headquarters in Beaverton, Oregon – a very beautiful place from what I saw. To get there, I took a 20 minute ride on the MAX Light Rail to a shuttle station, and a shuttle bus to the headquarters from there.

The campus was very park-like, overtaken by nature, and having the opportunity to tour a few of the buildings and get their back story was really fun and interesting. The alumnus I was with also took me to the employee store. This made Bill happy because he got new shoes out of the deal. I also purchased a couple San Francisco 49er shirts for him that were meant to be gifts. However, I accidentally mentioned to him that the cashier asked who the 49er fan was, and the cat was out of the bag. Fortunately, since I had purchased more than one shirt, I only had to give him one after my secret was out – saving the other for a gift. 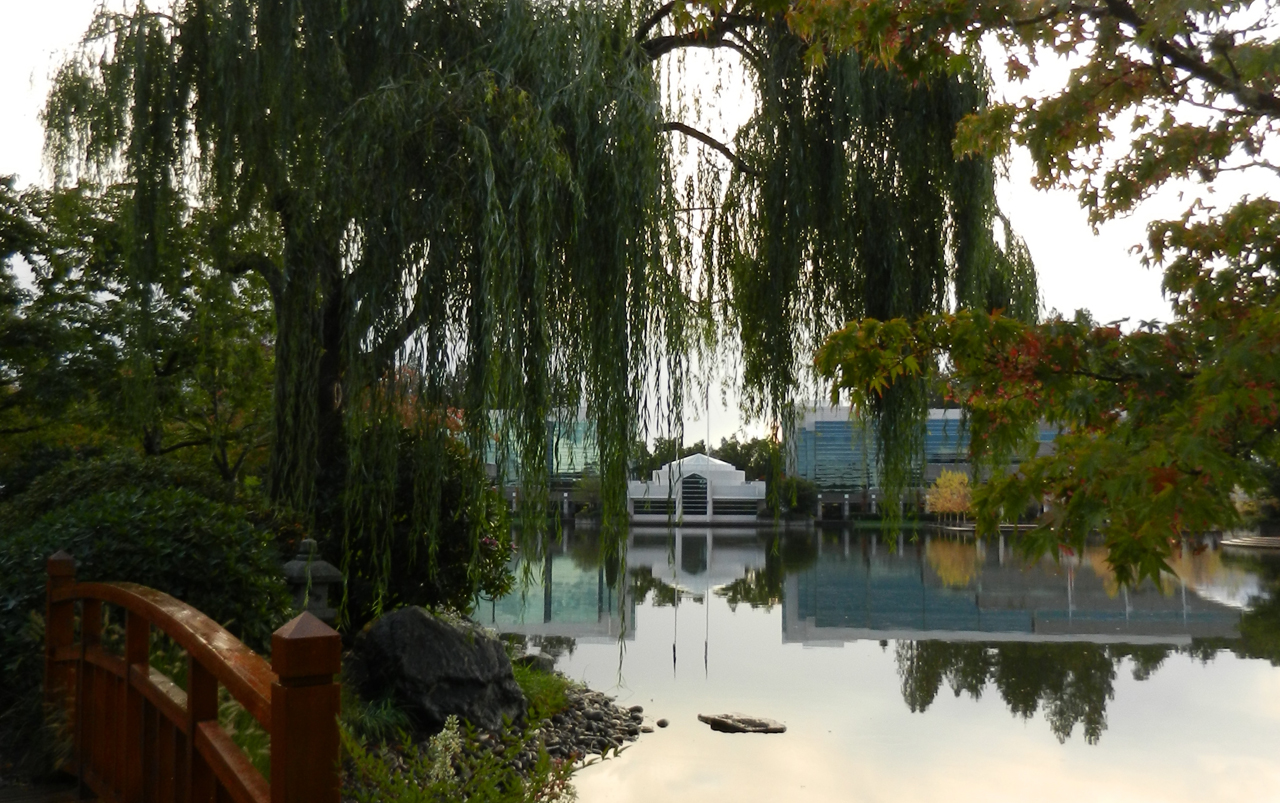 Another of the alumnus I met with was a student worker in my department when I first started at the college. I interviewed him at the hotel, and then we went exploring downtown together. Walking down by the Willamette River, and going to Voodoo Doughnuts – an “only in Portland” experience. (I had not planned to go, as I am not a huge doughnut person, but he insisted.) I purchased a couple donuts for myself as well as a couple for Bill. My favorite was the “Dirty Snowball” (cake doughnut with pink marshmallow topping, coconut on top, and peanut butter in the middle). Unfortunately is no longer listed on their website, so it seems they may have stopped making it.

Reflecting on this trip, as well as my solo trips to Memphis and Boston, reminds me how freeing they were for me! It’s so different being on your own, seeing and doing what you want when you want with no one else’s opinion clouding the experience. I recommend anyone who is even considering to travel on their own to do it. Even if it is just for a weekend – do it! You won’t regret it, I promise. With that being said, I think I need to plan another solo trip sometime soon myself!

There are many places I have fallen in love with. Below are seven of the top destinations I have visited and a few highlights from each of them. (In alphabetical order because I can’t bring myself to rank them.)