One day in Bangkok

As part of our Epic Adventure, Bill and I had a 13 hour layover in Bangkok, Thailand. To take advantage of the time, I put together a reasonable schedule (much unlike our first day in London, May 2013) with Lumphini Park and Wat Pho as the highlights of the visit. Little did I know, we would end up a little off track along the way.

We arrived in Bangkok and dropped our bags off for safe keeping at the airport storage area. Then we found the subway and were off for the city. Upon arrival, we sought out Lumphini Park and the adjacent street market so Bill could have his first taste of authentic Thai food and I could get a coconut to drink. Bill’s spicy pork salad certainly lived up to its name and I avoided it at all costs. It did, however, come with a plate of vegetables that I was able to enjoy. The only thing I did not like was the Thai basil, which was far too licorice-y for my taste. 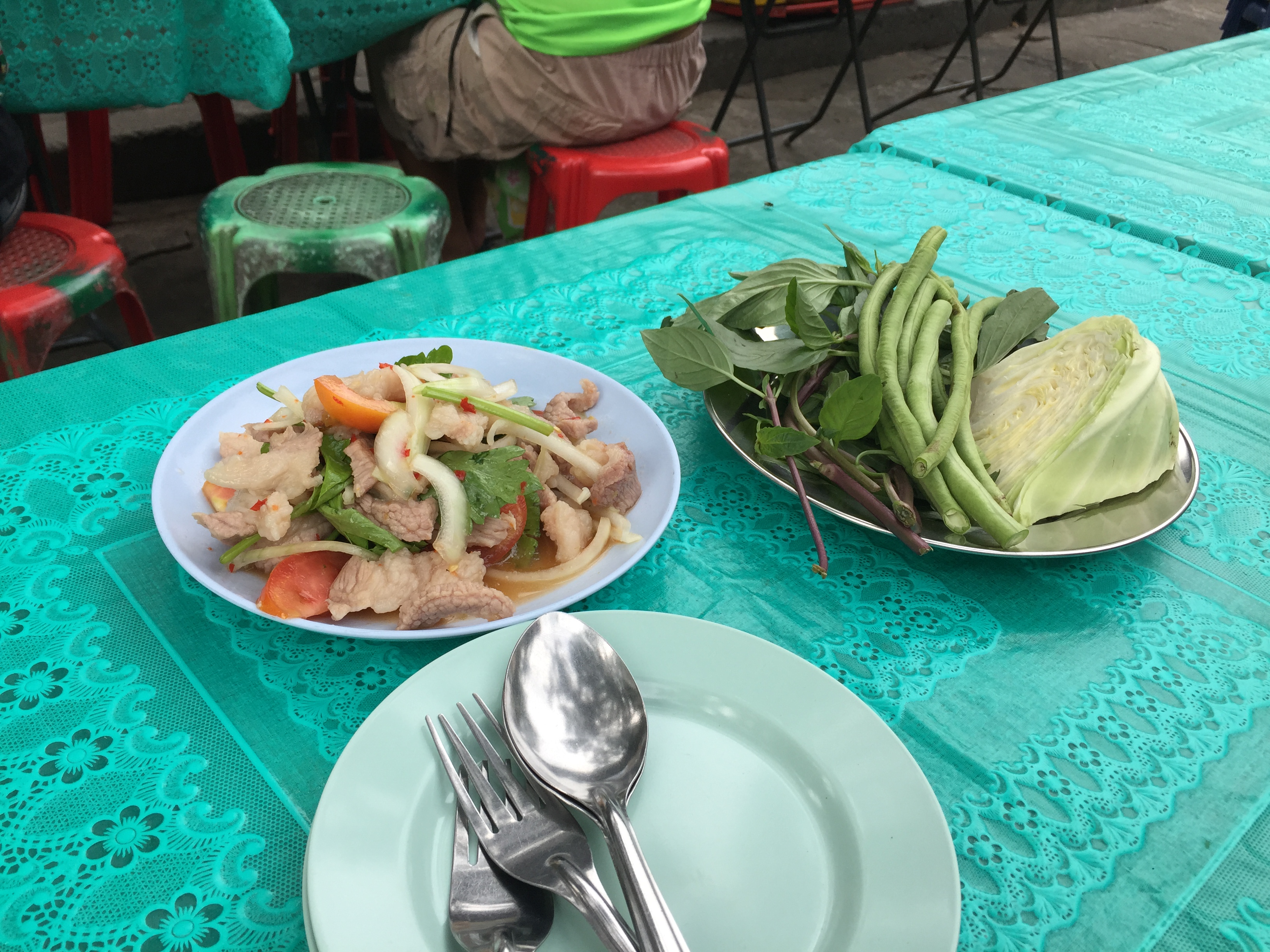 While strolling through the park, we came across the native monitor lizards (one of the main reasons I had chosen to add the park to our itinerary). They were, however, smaller than I expected. But I posed for my photo with one none-the-less. Another interesting characteristic of the parks in Asia are the outdoor gyms – not a bad idea if you ask me! Nature and exercise go together perfectly. 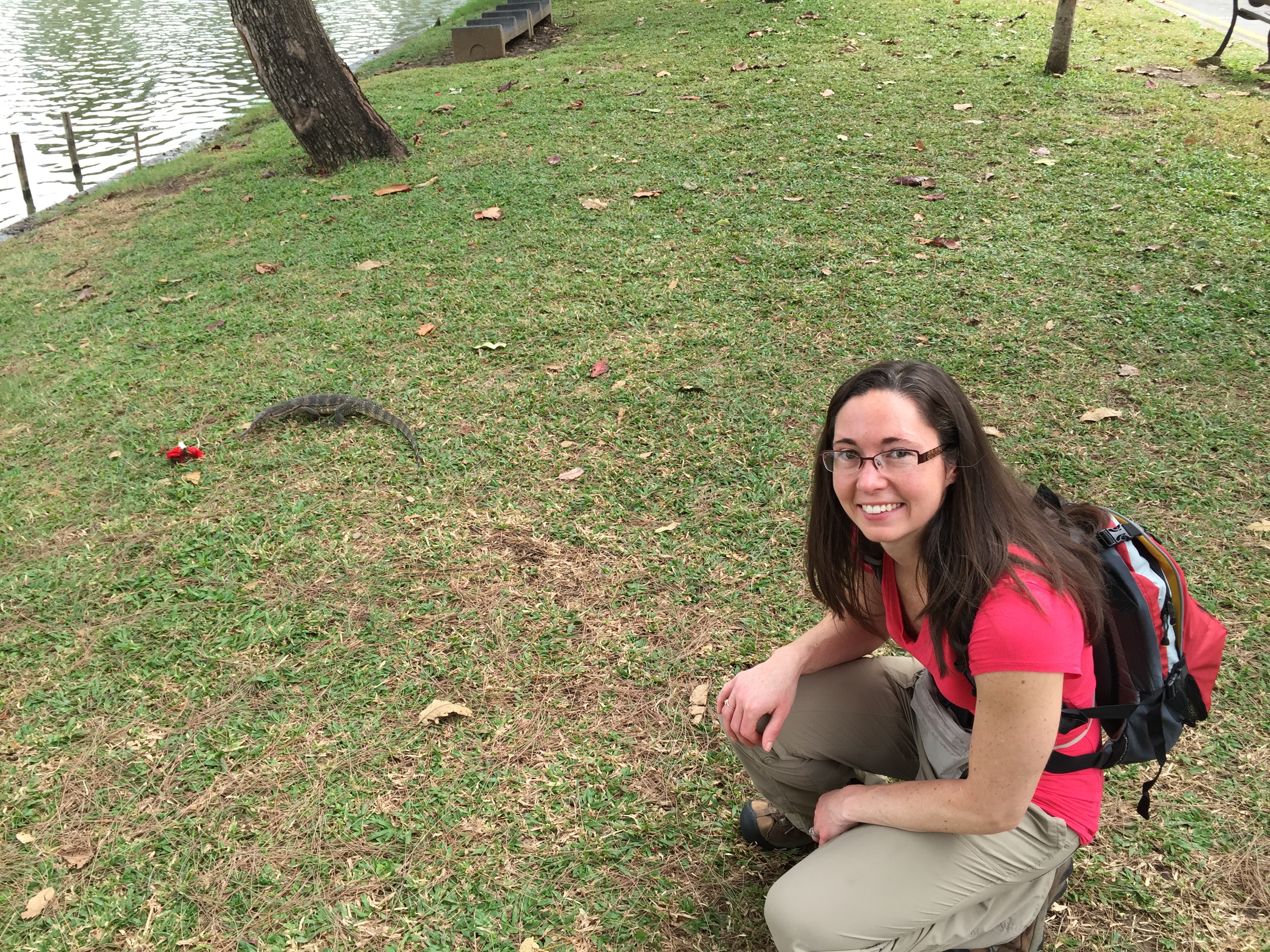 After the park, we were off to see Wat Pho, aka Temple of the Reclining Buddha. First we took the subway to Hua Lamphong. When we emerged from underground, we were welcomed by Wat Trimitre and consulted our map. This was a turning point for us (no pun intended) – Bill decided we should turn left, in which I expressed my disagreeing with the idea, but followed anyway. An hour or so, one bridge crossing, and MANY motorbike repair shops later, he realized I was right. Now it was time to make a decision – still attempt to make it to Wat Pho before it closed, or head back to the airport unsuccessful. I had my heart set on seeing the temple, so we set out to find a way to try and get there in time. 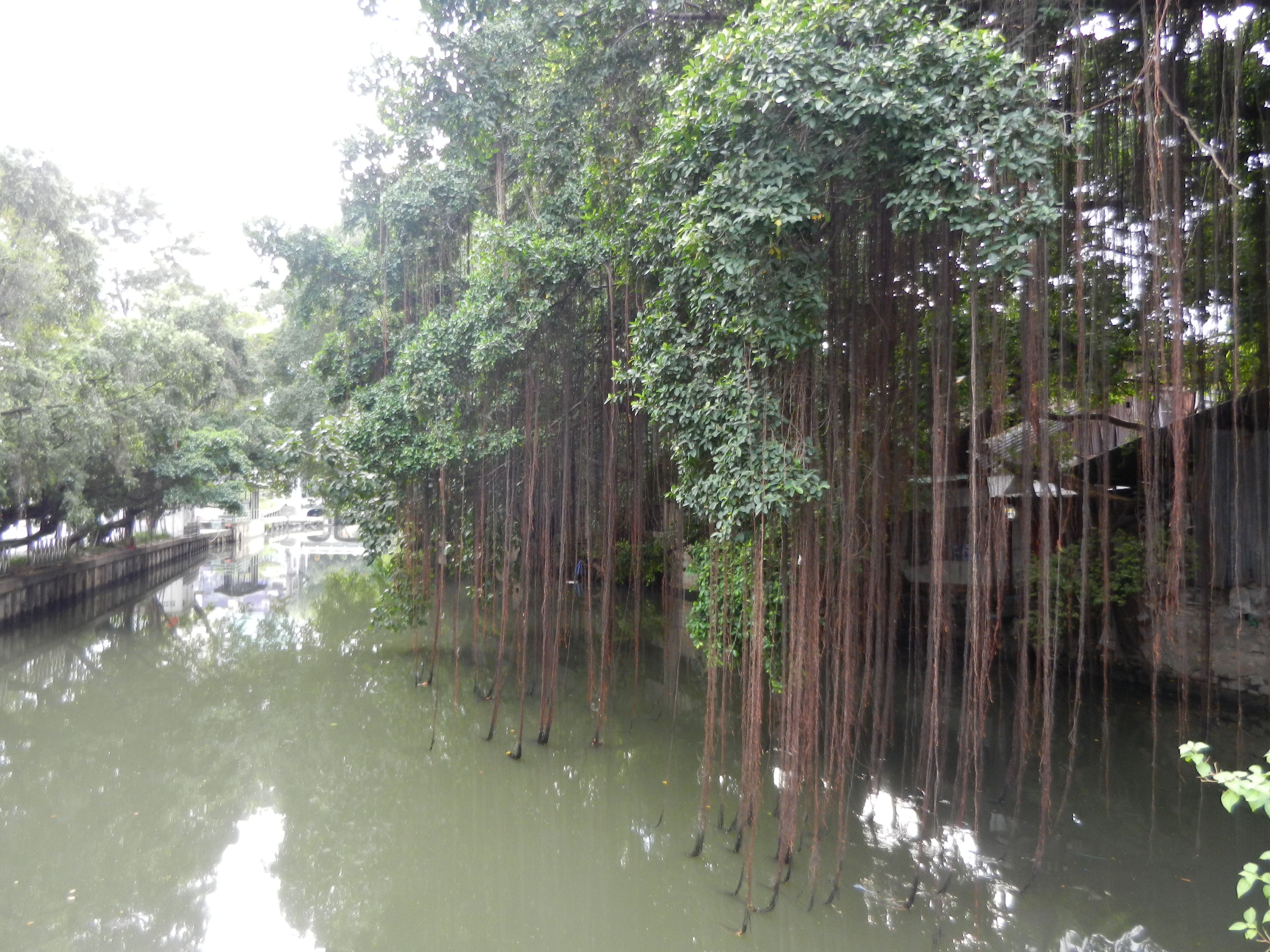 We checked with a tuk-tuk driver and were told it would be 3000 baht. When he realized we were not willing to pay that price, he tried to do some haggling, dropping the price down to 1500 baht, with two stops along the way. We graciously declined this offer and continued down the road to the boat station. This, again, was an interesting experience. Everything was in Thai, which made it impossible for us to decipher what the costs listed actually meant. After some debate, we stepped in line and readied the amount we expected to pay for the fare we needed to Wat Pho. To our delight, the woman selling tickets handed Bill two tickets and most of our money back. We boarded the boat and were on our way – secretly worried we were not headed to the right place. When we pulled up to the stop we knew we needed, we were relieved to know we had made it, however with little time to spare before the temple closed at 5pm. 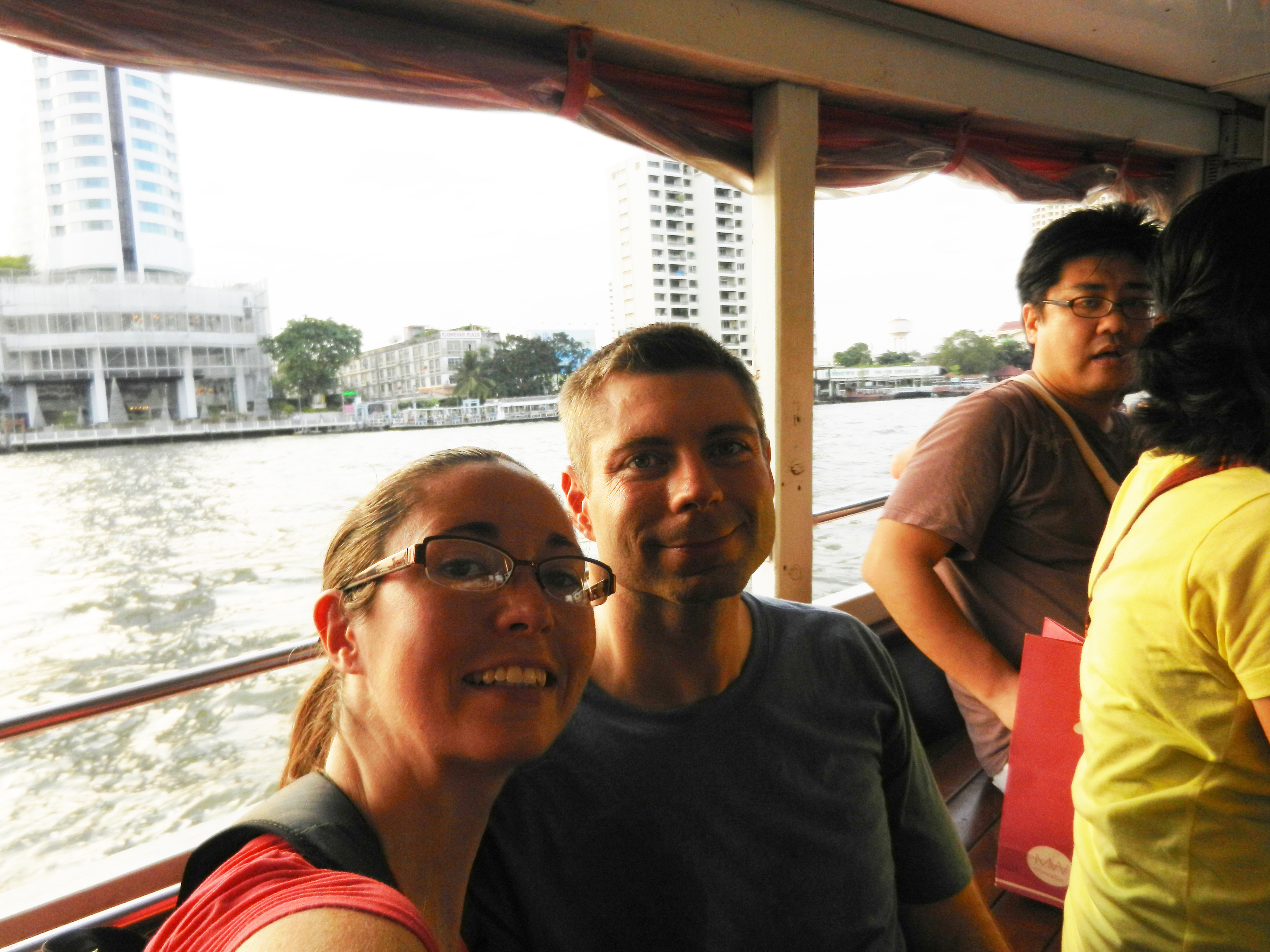 After disembarking from the boat, we passed through Suan Nakarapirom park – decorated for the Christmas season – and crossed the street to Wat Pho. Upon arriving at the wall outside, we were pleased to find it was open until 6pm, which gave us more time to explore. We purchased our tickets, slipped off our shoes, and entered the building that housed the Reclining Buddha. Before our eyes was the largest sculpture either of us had ever seen. Plated in gold, outstretched for 150 feet – it was awe inspiring. Its feet were even more special on their own. Longer than I am tall, the feet are inlaid with mother-of-pearl, depicting the auspicious symbols of Buddha. The walls of the room were also a sight to see – intricately painted with stories of Buddha’s life. 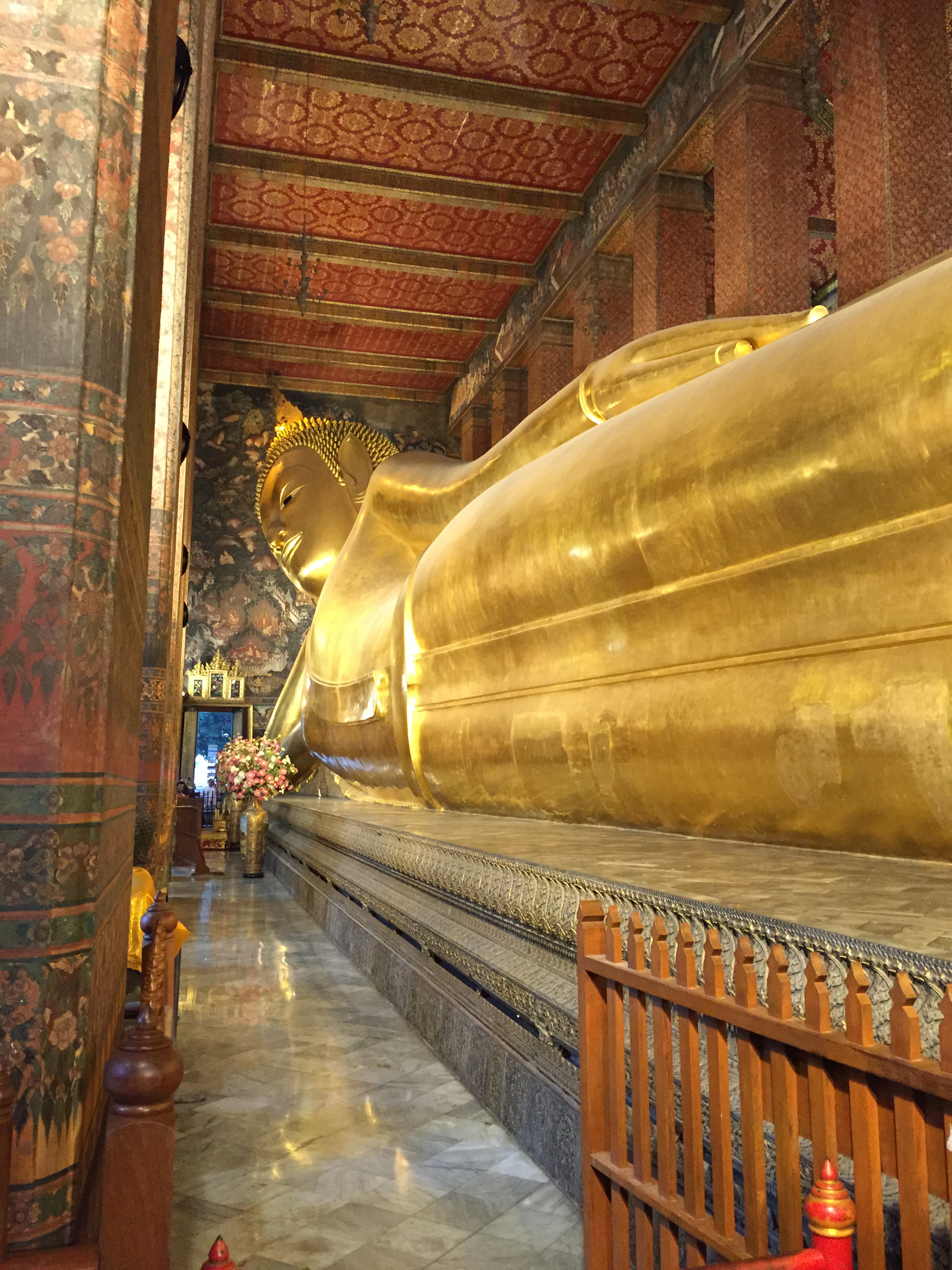 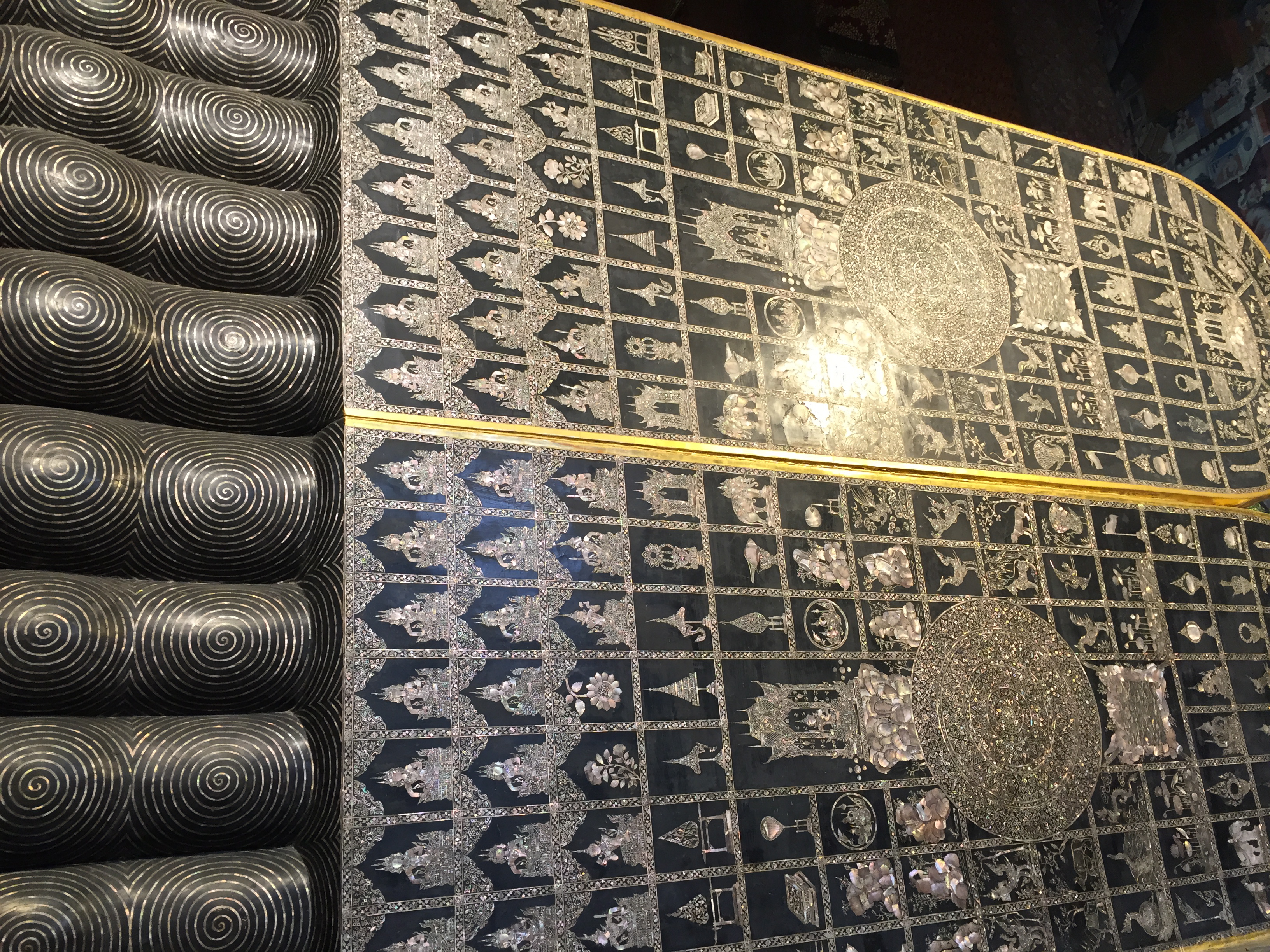 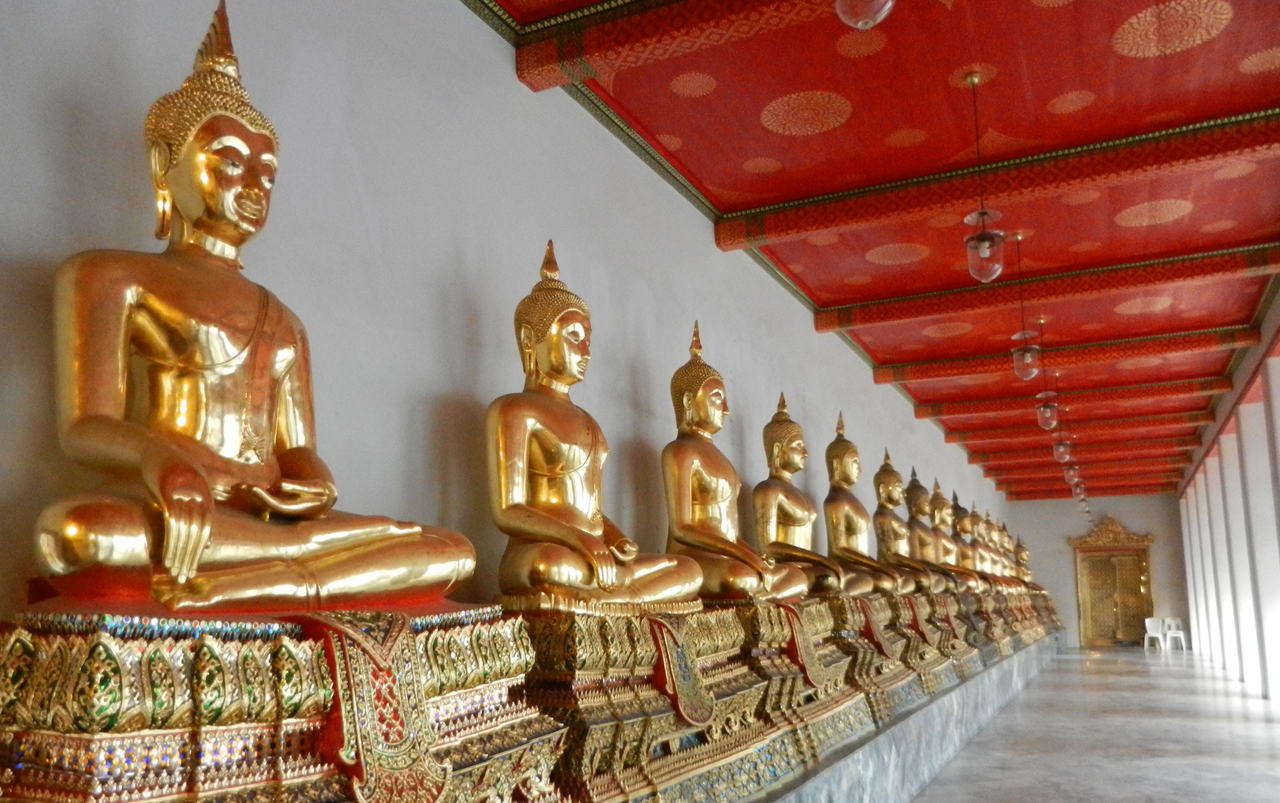 Soon we entered another building which housed a large seated Buddha and had huge doors inlaid with mother-of-pearl, depicting more stories of Buddha’s life. 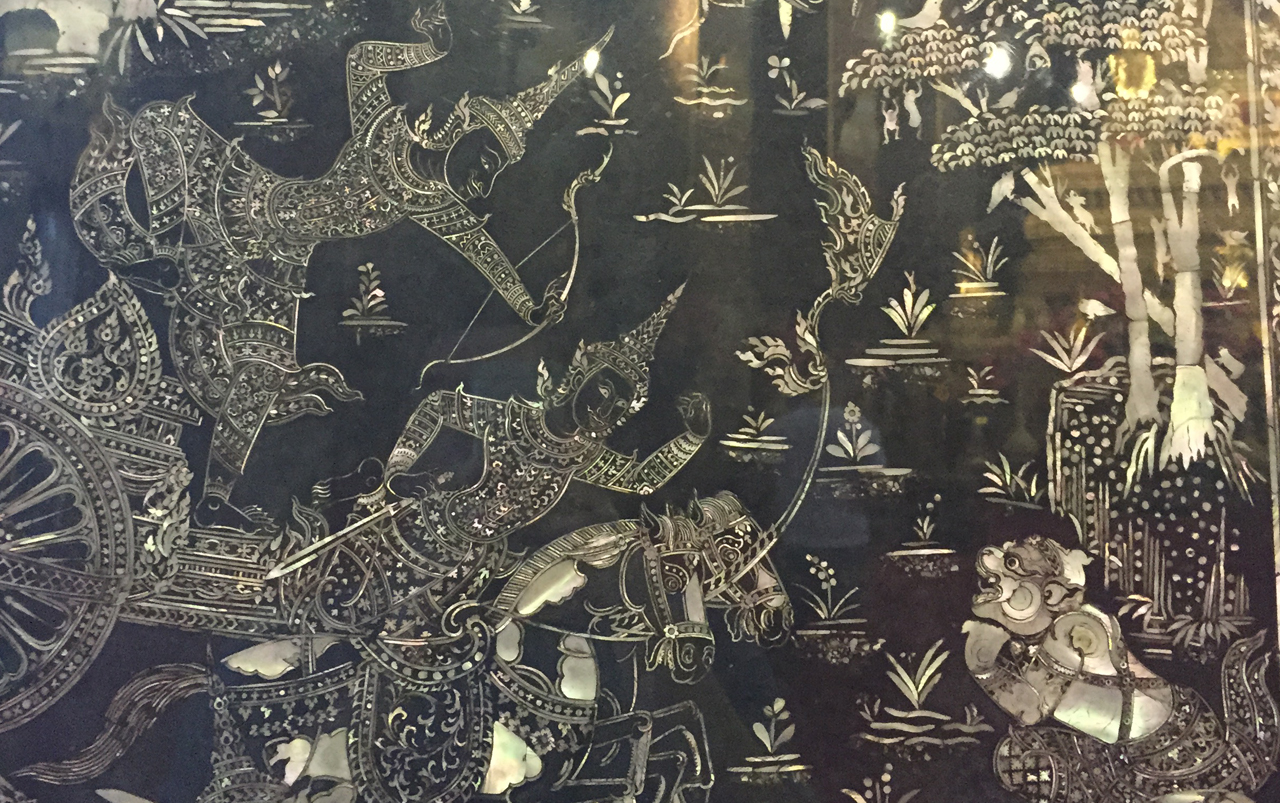 While exploring even further, we were greeted by the sights of monks hanging flags around the complex, and the moon shining down on us from above. As dusk arrived it was time for us to make our way back to the boat dock, but not before we took time to enjoy the lights at Suan Nakarapirom park and the evening sights along the river, including the view of Wat Arun across the way. 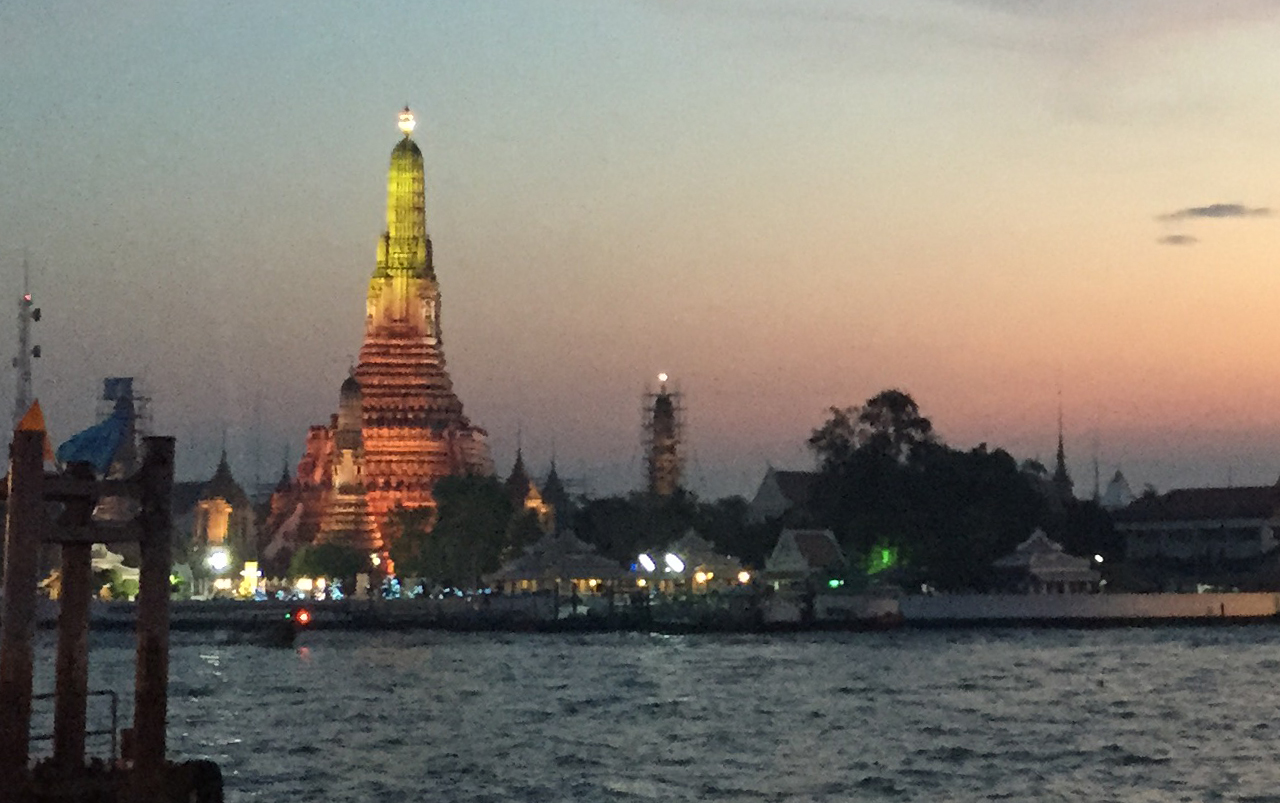 Eventually we boarded the boat and were on our journey back to the airport to prepare for our departure to Melbourne.